Review: James Bond is Refreshed and Thuggin' Out in "Casino Royale" 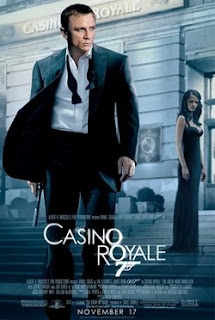 , Munich), who brings a bit of the thug to the venerable secret agent.

In his first big mission as 007 (Double 0 means the agent has a license to kill… but you knew that), James Bond tackles terrorism. M (Judi Dench), the head of British Secret Service, M16, is unsure of her new agent, who tends to leave a pile of bodies in his wake. Still, Bond travels to Madagascar where he engages in a pulse pounding chase of the would-be bomber, Mollaka (Sébastien Foucan). This is the kind of hard work Bond must do to learn that the key figure in a terrorist money laundering scheme is Le Chiffre (Mads Mikkelsen), a banker to the world’s terrorists.

In order to stop Le Chiffre and bring down the terrorist network, Bond eventually has to face Le Chiffre in a high-stakes poker game (Texas Hold ‘em) at Casino Royale (located in an unnamed town in Montenegro). In his corner, Bond has a beautiful British Treasurer official named Vesper Lynd (Eva Green), and of course, their initial disinterest in each other becomes a mutual attraction that goes farther. Meanwhile, dark forces have gathered around Le Chiffre, and Bond is finding that some of his own allies may be on Le Chiffre’s side.

How is Daniel Craig as James Bond? Imagine Sean Connery, but darker, edgier, and much more dangerous. Personally, I like it, but having Bond as a cold, killing machine is a bit off-putting. Still, Craig has an absolutely magnetic screen presence, and it’s hard not to focus on him even in a crowd scene. And he has a rock hard body.

Meanwhile, the overall film is pretty good. Almost gone are the sci-fi elements that have been a staple of Bond films, to one extent or another, since the beginning. Casino Royale is like the Jason Bourne films (The Bourne Identity, The Bourne Supremacy), but darker still. The film has several dry spots, but the narrative makes up for that with several edge-of-the-seat action sequences – each one mesmerizing. Martin Campbell does an excellent job keeping up the heart-pounding thrills by taking us from Europe to Madagascar to the Bahamas to Miami and back to Europe again (to an eventual explosive finale in Venice). In fact, Campbell does an excellent job staging the thrills so quickly and pacing them so well that the bad moments in Casino Royale seem like a figment of the viewer’s imagination. Even the poker game, which makes up the middle act of Casino Royale, is great.

While Craig is quite good, the rest of the cast is mostly average. Eva Green’s Vesper Lynd hardly registers as a Bond girl, and Mads Mikkelsen is a half-menacing and half comic stock villain. Judi Dench, however, has a lot of bite in her as M, and Dench, a truly fine actress, hits the right note in each of her scenes – so much so that her M is missed whenever she leaves.

I’m reluctant to compare Casino Royale to other Bond films because it is so different, but judged on its own, this is a fine film. Whether this new direction will stand firm over the long run is a question for the future, but right now, Casino Royale is a good thing.

Posted by Leroy Douresseaux at 8:50 AM