Solid Performances, Excellent Directing Shape "Up in the Air" 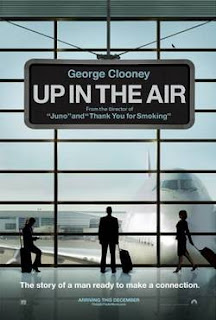 When I first heard all the praise for the 2009 film, Up in the Air, from director Jason Reitman (Juno), I was skeptical. Now, I have finally seen the film, and I like it. I like it a lot. Up in the Air is one of those “movies of the moment” that speak to our times, but this one works because it has excellent actors creating characters the audience will like and some may even love.

Up in the Air focuses on Ryan Bingham (George Clooney), who works for Career Transition Counseling out of Omaha, Nebraska. The job requires him to travel around the country and visit companies where he fires employees so that their bosses don’t have to do it. Ryan loves his life up in the air, and he is on the cusp of reaching ten million frequent flyer miles. Ryan is also a motivational speaker who encourages people to live a life free of relationships and without attachments to things. But change is coming.

First, Ryan’s boss, Craig Gregory (Jason Bateman), hires a new employee, an ambitious recent college grad, Natalie Keener (Anna Kendrick). Natalie proposes that the company ground the employees and conduct layoffs (firings) over the Internet. Secondly, Ryan meets another frequent flyer, Alex Goran (Vera Farmiga), and they begin a casual sexual relationship. Ryan’s younger sister, Julie Bingham (Melanie Lynskey), is getting married, and Ryan’s been invited, although he isn’t really part of his family’s life anymore. Now, Ryan is starting to make connections, but will that be enough to make him give up living a life with nothing and with nobody?

Whatever Up in the Air’s philosophy may be, it relies on good performances and engaging characters to sell it, especially the three major characters: Ryan, Natalie, and Alex. George Clooney is one of the few modern actors who remind me of movie stars from Hollywood’s Golden Age. Like Humphrey Bogart, Clooney seems to be playing himself, but he is so good as an actor that he makes us believe that he can be any character, from a fisherman (The Perfect Storm) to a brilliant con man (Ocean’s Eleven). Clooney sells us Ryan Bingham, and instead of coming across as shallow, Ryan comes across as a solid guy with real motivation and personality.

Vera Farmiga usually delivers deceptively smooth performances that, combined with her unique, not-cookie cutter beauty, make for attractive, even alluring characters. Alex Goran is a mysterious, rich with many layers, and Farmiga makes us want to peel back all those layers. Anna Kendrick also turns Natalie, who could have been an annoyance, into someone charming and engaging. Whenever Natalie walks away from the camera, the movie seems lonesome without her.

Perhaps, the lion’s share of the credit should go to director Jason Reitman, a major new talent. Everything about this movie works, and the director is the one who has to bring out the best in his cast and crew. Up in the Air, with its themes of loneliness, disconnected people, shallow relationships, and corporate callousness could have been a downer. When it depicts people getting fired, the movie seems too close to home, but that is a testament the sense of verisimilitude here. The truth is that Up in the Air is timeless because it tells us a story we recognize, in one way or another, and gives us characters with which we identify, in part or in whole.

Posted by Leroy Douresseaux at 2:30 PM