Review: "The Fast and the Furious" is Still Furious 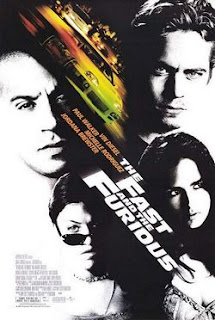 For some reason, I just felt that I had to see The Fast and the Furious before I saw its recently released sequel, 2 Fast 2 Furious. I wanted to see it when the film was first released, but I avoided it. When I asked a former associate about TFTF, he gave it a conditional approval, shrugging his shoulders to let me know that it was entertaining, but forgettable – one of those films. Yes, it certainly is one of those popcorn flicks, forgotten as soon as you walk out the theatre, but while you’re inside, you will be on one of those “rides of your life.” This is simply slick and fantastic entertainment, pure high-speed pleasure, and I wished I’d seen it on a big screen.

Brian O’Connor (Paul Walker) is an undercover cop trying to catch a ring of thieves who hijack 18-wheelers. They carry out their crimes in very fast, small cars. His bosses figure they can uncover the thieves’ identities by planting Brian into the world of L.A. street racing, where he meets the top dog of racers, Dominic Toretto (Vin Diesel). Brian falls for Dominic’s sister Mia (Jordana Brewster), and before long, he just can’t believe that Dominic and his crew could be the hijackers because he’s down with them now. Brian soon finds himself caught between his professional obligations as a law enforcement officer and his position as Dominic’s homie and Mia’s boy toy.

The script ain’t nothing to scream about; it’s a professional by-the-numbers job, and not a really good one at that. There’s lot of emoting and dramatic huffing and puffing from the mostly young cast, but it all works out. The story owes something more than just a nod to the great Keanu Reeves/Patrick Swayze actioneer, Point Break, also about a policeman who goes native when he infiltrates a gang of crooks with a charismatic leader. With his mega buff body virtually leaking testosterone, Diesel is automatic charisma. Paul Walker (also a veteran of a Cohen film, The Skulls) is almost an exact copy of the Reeves character in Point Break, and he carries his part quiet well.

OK. This is a very good action movie, the kind you want to see when you want an action movie. If you’ve never seen it, then you’re really missing something. Every chase scene and race is brilliant staged and executed. The Fast and the Furious deserves to be called “an adrenaline rush.” [If you’ve seen it already, you’ll probably still get a kick out of it, especially with the “tricked out” DVD release of the film.]

Make sure you watch all the way through the credits, where you will find a tidy wrap up to the story.