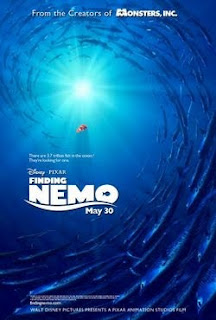 Marlin (Albert Brooks), a clown fish, and his wife Coral (Elizabeth Perkins) live in an underwater suburban utopia for fish. They are about to be new parents as they await the hatching of over 400 eggs, when suddenly tragedy strikes in the form of a natural predator. After a horror that recalls the Disney classic Bambi, all that is left to Marlin is one tiny egg.

As the story moves to the future, Marlin has never really recovered from his loss. He is overprotective of his son Nemo (Alexander Gould), who was born with an underdeveloped fin (formerly known as a handicap), so he doesn’t swim well. Naturally, Nemo hates his father coddling him. One day he rebels by approaching a shipping vessel where a human captures him. Devastated, Marlin begins a desperate quest to find his only child. A blue tang fish named Dory (Ellen DeGeneres), who has short term memory loss, joins Marlin on the search for the boy. In the meantime, Nemo has found himself in the aquarium at an Aussie dentist’s office. He befriends a group of fellow captives who plot to help Nemo escape before he ends up an unfortunate gift to the dentist’s niece.

This is the fifth Walt Disney Pictures/Pixar Animation Studios co-production, and the union has produced five beautiful films. Toy Story and Toy Story 2 are two of the best animated films ever made. A Bug’s Life was a big hit, and I adore Monster’s Inc. more every time I see it. Finding Nemo ably stands with its brethren as another very fine achievement in the very short his story of computer animated feature films. I can say this without hesitation: Finding Nemo is a great animated film. I’ll save you the time reading this unless you really want to know what I have to say – rush out and see this film. It’s not perfect, and I can forgive the filmmakers the awfully syrupy fish suburbia that they created for the film’s opening scene; still, excellence must be noticed.

Directed by Andrew Stanton (co-director of A Bug’s Life) with Lee Unkrich (Monster’s Inc. and Toy Story 2) the film has the emotional resonance of the Toy Story films. Yes, it is inspired wacky fun for the kids, and they’ll laugh at lot; adults will probably laugh more than the tykes. Yes, the film has a gorgeous color palette that just dazzles the senses; it’s a colorful, visual treat on par with the great Technicolor films of yesteryear. However, the most important thing about the film is how it touches upon the relationships between people, both entertaining and connecting with the audience. You know there is something special about using animals to tell human stories. People have told these “anthropomorphic” tales since we could tell stories. It is easier for people to laugh at human foibles when we see our foolishness copied by cartoon animal-people. Animated films, cartoons, and comic art stories use this genre extremely well and through this animators and cartoonists take the craft of storytelling and make it an art.

The central story is about the protective bond between parents and their children, in this specific case, a father and his son. Marlin lost so much when he seemed about to have it all that he is way too overprotective of Nemo, essentially the only person he has left in his life. Marlin can’t deal with the fact that the older his son gets, the harder it is to micromanage the boy’s life. He can’t stop every bad thing that may happen to his child from happening. He’s also afraid of the environment in which he lives, the ocean, so he doesn’t really enjoy life. Nemo wants to be independent, but buried in the back of his mind is that he may be as physically inadequate as his father treats him. There are also many notable subplots: friends overcoming obstacles, learning to accept the differences in others instead of prejudging negative traits on them, people joining together to help a stranger in need, and of keeping hope alive.

I know that this might seem to be a bit heady for a cartoon, but this ability of a Pixar film to entertain and delight and to teach and to inspire simply continues that which is a tradition of the best Disney animated films. We’ve often considered classic Disney animation to be amongst the best films ever made (well, at least some of us), and Pixar just shows audiences that an animated film can be just as fun as the funniest comedy, that a cartoon can mimic the drama of humanity as well the best “real” movies.

Posted by Leroy Douresseaux at 12:26 PM