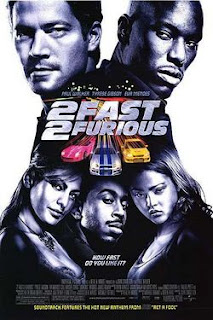 When we left Brian O’Connor (Paul Walker) at the end of The Fast and the Furious, he was on his way to be stripped of his badge as an officer of the law for assisting hijacker Dominic Torreto in escaping. In 2 Fast 2 Furious, Brian has moved to Miami and plays the city’s street racing circuit for cash. However, the cops come calling again with a deal: help them infiltrate the domain of a drug lord named Carter Verone (Cole Hauser) and they will in turn clean his record.

Of course, the drug lord needs fast drivers (convenient, right), so Brian recruits Roman Pearce (Tyrese), a childhood buddy who has a grudge against Brian (which creates dramatic tension between the lead characters). Roman is also street racer, and Brian hopes Roman can help him pull off the sting better than another undercover cop could. The mission tricky with many complications, just like in TFTH. Brian is caught between anxious U.S. Custom’s officials and a jealous and violent criminal who doesn’t fear the law; neither side will let him and Roman let them down.

The first film borrowed liberally from the film Point Break changing Break’s surfer/bank robbers to street racer/hijackers. The street racing was an integral part of the film, and the original director Rob Cohen used every trick in the bag to heighten the illusion of super speed; he also had Vin Diesel.

2 Fast 2 Furious seems exactly what it is, a sequel, a by-the-book action movie that succeeds in at least being vacuous entertainment despite itself. The street racing exists solely because this film is a follow-up to a movie about fast cars. The script is lousy with action movie formulas. There’s a white guy/black guy dynamic with plenty of tension between the two. A sour incident from the past gives their partnership an extra edge and potentially endangers their assignment. Paul Walker as Brian O’Connor isn’t an energetic, kinetic action hero; he’s more stoic, so Tyrese as his partner Roman brings the comedy and raw sense of street bravado to the movie. Their chemistry is good in spite of a script intent on them not having any. Don’t forget the vaguely Latin drug lord who uses brutal methods to get his way. The cast is thoroughly mixed with sprinkles from every ethnic group, short of gypsies. The soundtrack is filled with slammin’ hip hop tracks (the first was a mixture of thrash, techno, and hip hop), and the score is surprisingly good and add fuel to the fire of the film’s best scenes.

Despite the paint-by-numbers scenario, director John Singleton manages to conjure a fairly entertaining car chase movie. While the cars were hot items in TFTF, Singleton treats them as art objects in his film. He lovingly caresses them with the camera; he suggests that they are almost as much the stars as the human actors. In fact, it’s a great move because all that attention on the hot cars distracts the viewer from some of the film’s drier moments. And don’t forget the girls; Singleton laps up the hotties when he’s not pushing up on the hot rides.

2 Fast 2 Furious isn’t bad, but it isn’t as good as its predecessor. But while TFTF was a hard-edged action flick, I will give 2 Fast credit for having a much better sense of humor. It never takes itself seriously. In fact, the filmmakers seem to insist on telling us that they know what this is – a perhaps dumber sequel to a dumb action movie, so let’s just relax and enjoy 2 Fast.

2 Fast is exciting and thrilling and hot and sexy. It’s a bad cartoon full of bullet-spitting guns, hot hoochies, fantastically speedy cars, explosions, and testosterone: in other words, a summer movie. When you go to see a thriller, you expect even the lamest concepts to give you that vicarious thrill of the jolt of danger, and sometimes I really believed that Brian and Roman might get a bullet to the head. So even if you don’t make it to the theatre to see 2 Fast 2 Furious, it will make a nice DVD rental.