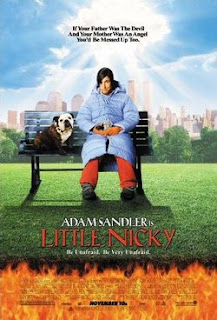 Satan (Harvey Keitel) was about to give up his throne (after 10,000 years of ruling Hell) to one of his three sons: the sly Adrian (Rhys Ifans), the brutal and abusive Cassius (Tom “Tiny” Lister, Jr.) or his sweetest son, Nicky (Adam Sander). However, the King of Damnation decided to keep his throne for another ten thousand-year rule, much to the chagrin of both Adrian and Cassius, so they decide to escape to Earth and create a hell there where they can rule. Their rash behavior freezes the gates of hell, and Satan begins to disintegrate. Nicky reluctantly goes to Earth to bring his dastardly brothers back (by trapping them in a flask and returning both brothers at the same time), but he falls in love with a shy girl named Valerie (Patricia Arquette). Nicky’s love interest and his brothers’ bullying complicate his task while Adrian and Cassius turn Manhattan into a hell on Earth.

Many fans consider Little Nicky to be Adam Sandler’s worst film as a headlining star, but the film probably put off people for two reasons. First, it is a genre film that plays with magic and the supernatural, with Hell also as a major setting for the film. Secondly, it is a transition film that displays both the juvenile attitude and crude humor of Sandler’s mid to late 90’s star making turns in such films as Billy Madison, Happy Gilmore, and The Waterboy and the romance of the comedy date films like Mr. Deeds and 50 First Dates that Sandler would emphasize in the new century. The young male audience that makes up a large part of Sandler’s fan base prefers the former gross out comedy to the latter relationship films.

What also may have most turned people away is the Little Nicky’s excessive vileness, particularly in regards to religion, religious authority, and religious institutions. I found that aspect shocking, mildly offensive, and unnecessary; still, I applaud the filmmakers’ boldness in handling religion in such a fashion. That’s just one of the things that makes Little Nicky stand out from the crowded field of juvenile comedy. There’s lots of crude humor, and most of it is quite hilarious, and it’s not just visual gags because there is a frankly raw use of language that really gives this film zing. There is also a wonderful romance between the shy couple of Nicky and Valerie that works because they are such a perfectly matched, mismatched couple.

The film does go a little wrong in its second half. Nicky’s pursuit of his brothers abruptly begins to dim the film’s comedy, and more time should have been spent on the Nicky/Valerie relationship. Still, for all its rawness and crudeness, Little Nicky is a feel good film, and it accomplishes its feel good attitude with lots of movie star cameos. Even small appearances by well-known actors give a film brief bursts of energy, and Sandler fills the film with friends, especially fellow alumni of “Saturday Night Live” where Sandler starred from 1991-95.

As for Sandler’s performance, it is a bizarre part that he actually plays with a touch of sweetness and goofy charm that really sells the character. He, however, keeps his fire low to allow his wonderful supporting cast to shine, and they make Little Nicky as much theirs as it is his – an unusual film that is uncommonly funny.