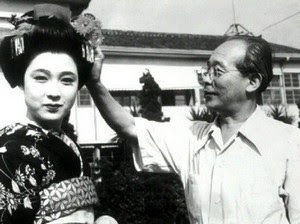 Director Kenji Mizoguchi’s signature is the expression of strength, sorrow, and fragility of women, and his mastery of the long take and mise-en-scène are legendary. His 1953 film, Ugetsu, won the Silver Lion at the Venice Film Festival and his films went on to have a tremendous impact on Western directors including Jean-Luc Godard, Andrei Tarkovsky, Jacques Rivette, Rainer Werner Fassbinder, and Theo Angelopoulos. VIZ Cinema proudly presents four of Mizoguchi’s greatest works – Sisters of the Gion, Ugetsu, Street of Shame, and Utamaro and His Five Women – in crisp 35mm with English subtitles.

Tickets, screening times and more details are available at: www.vizcinema.com.

Sisters of the Gion, June 19th – June 21st and also June 24th
(1936, 69min, 35mm, with English Subtitles)
Sisters of the Gion follows the parallel paths of the independent, unsentimental Omocha and her sister, the more tradition-minded Umekichi, who are both geishas in the working-class district of Gion. Mizoguchi’s film is a brilliantly shot and provides an uncompromising look at the forces that kept many women at the bottom rung of the social ladder.

Ugetsu, June 19th – June 22nd
(1953, 94min, 35mm, with English Subtitles)
Ugetsu is a ghost story like no other and the Japanese director’s supreme achievement. Derived from stories by Akinari Ueda and Guy de Maupassant, this haunting tale of love and loss – with its exquisite blending of the otherworldly and the real – is one of the most beautiful films ever made.

Street of Shame, June 19th – June 20th and June 22nd – 23rd
(1956, 87min, 35mm, with English Subtitles)
For his final film, Mizoguchi brought a lifetime of experience to bear on the heartbreaking tale of a brothel in Tokyo’s red light district, full of women whose dreams are constantly being shattered by the socioeconomic realities that surround them in post-war Japan.

Utamaro and His Five Women, June 19th – June 20th and June 23rd – June 24th
(1946, 106min, 35mm, with English Subtitles)
Inspired by the life and work of the wood block print artist, Utamaro Kitagawa (1753-1806), who revolutionized the medium by capturing human emotion into his artwork, Utamaro and His Five Women is a fascinating study of a man’s dedication to his art and adherence to self-expression in a time of rigid conformity.


VIZ Cinema is the nation’s only movie theatre devoted exclusively to Japanese film and anime. The 143-seat subterranean theatre is located in the basement of the NEW PEOPLE building and features plush seating, digital as well as 35mm projection, and a THX®-certified sound system.

NEW PEOPLE offers the latest films, art, fashion and retail brands from Japan and is the creative vision of the J-Pop Center Project and VIZ Pictures, a distributor and producer of Japanese live action film. Located at 1746 Post Street, the 20,000 square foot structure features a striking 3-floor transparent glass façade that frames a fun and exotic new environment to engage the imagination into the 21st Century. A dedicated web site is also now available at: www.NewPeopleWorld.com.