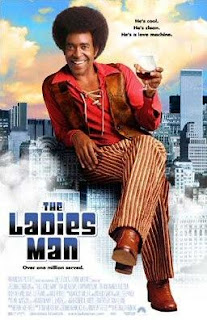 When I first saw advertisements for this movie, The Ladies Man, I really wanted to see it. I wasn’t just another movie on my list; I craved seeing this movie. From the ads, it looked as if it would be filled with those obnoxious pimp daddy retro-60’s/70’s blaxtiplotation stereotypes that are in vogue, and at the moment, I wanted some of that.

I got it, but in a sort of wishy-washy, screwed up way. You see, black folks can be funny and entertaining to white audiences, if they know how and what to deliver. I watched Eddie Murphy and Chris Tucker satisfy whatever that craving for silly Negroes is to different generations (though Murphy returned from his early to mid 90’s slump as a family movie comic actor). Black and white audiences expect the same thing from their black funny guys and gals, they just want it prepared differently. One group might flock to Booty Call and the other prefers Dr. Dolittle.

The Ladies Man, a film by Reginald Hudlin (House Party, Boomerang, and the Great White Hype) attempts to deliver the colored goods to a White audience. I honestly believe that upon reading the script, they knew that black people would see through this limp-wristed minstrel charade.

Based on an ongoing “Saturday Night Live” skit, the lead is Leon Phelps (Tim Meadows, who originated the character on SNL) as a radio advice show host who gets himself and his producer, Julie (Karyn Parsons, “Fresh Prince of Bel-Air,” Major Payne), fired from the major Chicago gig because of his insistence on using crude language to discuss sexual topics (although kind of language keeps television talk shows on the air). During their difficult and unsuccessful hunt for other employment (the first point upon which this movie turns), Phelps receives a letter from a wealthy former lover who wants to take care of him; he must however discover her, as the letter is unsigned (the second point). Meanwhile, the husbands of Phelps many lovers have banded together to find and bring harm to Phelps whose identity is unknown to them because the only glimpse they ever got of him was of his ass and the distinct tattoo upon his right buttock (his unknown identity being the third point). This movie is actually not without possibilities. It is, after all, simply product, and if you make a good cheeseburger, garbage food though it may be compared to gourmet food, if made well it can be a satisfying meal.

When the writers moved Phelps from sketch character to full-length movie character, they forgot to fully develop him. In the movie, he’s stuck somewhere between cipher and character – almost, but not quite where he needs to be. Phelps is supposed to be some kind of fantastic lover man, but the audience must assume that because the script darn well never shows us why. If we suspend our disbelief, we still have a hard time convincing ourselves that his character’s silly “make out” lines are meant to be attractive and inviting to women. Phelps is undeniably dumb, dull-witted, and slow. He has a giant Afro that screams fake like Astroturf, and his wardrobe is porno movie chic. There should be some attempt to humanize him and make him attractive to the audience. There should be something real about him that makes him attractive to women. We can assume from a few scenes that he possesses massive genitalia, but we never see that; instead we see men gawking at his off screen groin area. We do see his ass a few times, which is nicely shaped and sculpted, whether it belong to Meadows or a butt double.

The actors certainly seem up to the task; they’re all earnest even with a bad script. All the cuckold husbands are quite convincing, especially the delightful Will Ferrell (SNL and A Night at the Roxbury) and Eugene Levy. Midway through this movie, you can sense that the actors are ready to bust out, if only they had the material. Karyn Parsons is willing passionate and believable, but she is largely reduced to playing lady in waiting to Meadows’ clueless Phelps. It was good to see Billy Dee Williams as the bar owner Lester. He is as handsome and as talented as, say Richard Gere. I wonder why we see so much of Gere, who has one flop after another, while we see almost nothing of Williams on the big screen.

But in the end, so much is left to assumptions and playing upon stereotypes. One can see in Meadows face the ability to give this character life, but he’s left with a caricature, a minstrel man. When the audience can identify the characters and then sympathize with them, they can better accept not only dramatic situations concerning the characters, but also comedic situations. The audience will giggle at a few situations that they might recognize because they are familiar with the stereotypes. However, a fully developed story with surprises that delight and familiarity that hits home will make for a fine cinematic experience. The writers should take the time to ground the story in reality, not necessarily make it realistic, but give it a sense of verisimilitude.