Gromit Shines in "The Curse of the Were-Rabbit" 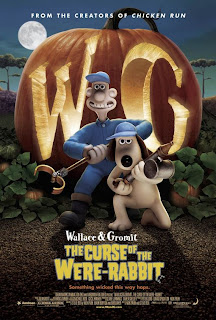 Wallace & Gromit: The Curse of the Were-Rabbit is a 2005 Oscar-winning, stop-motion animated film. This comic horror, British film focuses on the eccentric inventor, Wallace, and his silent dog, Gromit (the brains of this duo).

Director Nick Park and his stop-motion, “Claymation”-like characters Wallace & Gromit, return in a new film, Wallace & Gromit: The Curse of the Were-Rabbit. The cheese-loving Wallace (voice of Peter Sallis), an affable, absent-minded inventor, and his faithful dog, Gromit, who doesn’t say a word, but is smarter and wiser than his human master/friend, have their first full-length film in The Curse of the Were-Rabbit; they previously were the stars of three animated short films, all Academy Award-nominated, with two winning Oscars.

In this new feature, Wallace & Gromit’s hometown is in the midst of a vegetable growing fever because the Tottington Hall Giant Vegetable Competition. The enterprising chums have been cashing in on this “veggie-mania” with their pest control outfit, “Anti-Pesto,” which captures and humanely dispatches the hundreds of rabbits that have invaded the town’s sacred vegetable gardens, trying to eat all those overly pampered giant veggies the town folks are growing for the Giant Vegetable Competition.

Suddenly, a huge, mysterious vegetable-ravaging beast begins terrorizing the town attacking all those prized garden plots by night, eating or destroying everything in its path. Panic sets in because this monster, dubbed the were-rabbit, endangers the Giant Vegetable Competition. Determined to protect the competition Tottington Hall has held almost annually for over 500 years, its hostess, Lady Tottington (voice of Helena Bonham Carter), hires Anti-Pesto to catch the creature, but in a humane fashion that doesn’t lead to the vegetable-chomping marauder’s demise. Also, lying in wait, is Lady Tottington’s snobby suitor, Victor Quatermaine (voice of Ralph Fiennes), who’d rather shoot the were-rabbit, which would not only make him a local hero, but might also secure him Lady Tottington’s hand in marriage. With Wallace & Gromit having so much trouble securing the beast, Lady Tottington must eventually give in to Victor’s desire to hunt the were-rabbit. What she doesn’t know (but Victor does) is that the hunt could have dire consequences for Wallace, who is smitten with Lady Tottington. Can Gromit save the day again?

Co-directed by Nick Park and Steve Box, The Curse of the Were-Rabbit is easily one the few truly great films I’ve seen this year. Five years in the making, and the film shows that Park and his crew are geniuses of stop-motion animation (also known as Claymation®). There is just so much ingenuity in the film, from Wallace’s crazy inventions and assorted contraptions – such as the brain altering machine that is supposed to make rabbits shun veggies to the suction device and tanks that holds captured rabbits.

Park and company create amazing edge-of-the-seat action scenes as thrilling as those in live action movies. The Curse of the Were-Rabbit also has safe adult humor – a combination of soap opera romance and mystery and intrigue mixed with the offbeat Wallace & Gromit’s disarming humor. The film is a touch dry in several places, in which scenes play out slowly or seem padded. Also, I didn’t like Lady Tottington and Victor Quatermaine because they were both facially unattractive and too caricatured, especially Victor, more unlikable than he needs to be even as a villain.

The story, ultimately, is about a man and his dog – Wallace the happy chum and Gromit the good-natured patient companion who always takes care of his cheese-loving master. Gromit, who doesn’t have a mouth, has physicality on par with silver screen legends of the silent era such as Buster Keaton and Charlie Chaplin, and Gromit’s face can be as expressive as a pantomime character. Gromit, made by hand and animated by a painstaking stop-motion process, has soul in a way that characters created in the other 3-D animated process, computer animation, likely won’t ever have. Wallace & Gromit, two of the most delightful characters in the history of animation, are more engaging than the characters that populate such films as Shrek and Monster’s Inc., as fun as they are.

Expertly crafted, Wallace & Gromit: The Curse of the Were-Rabbit will impress even viewers not interested in “how they do it.” Fun to watch, it’s one of the year’s premiere comedies and best films.