A Grand Day Out with Wallace & Gromit 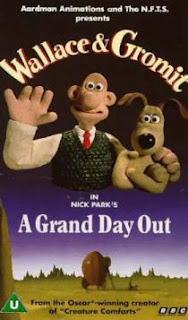 Wallace & Gromit: A Grand Day Out is a 1989 animated film short. It is the first in the series of Wallace and Gromit short films that use the stop-motion animation process. A Grand Day Out earned an Oscar nomination for “Best Short Film, Animated,” while winning the BAFTA Award for “Best Animated Film.”

A Grand Day Out follows Wallace (Peter Sallis), the wacky inventor, and Gromit, his exceedingly patient and brilliantly resourceful canine. The duo builds a rocket ship that takes them to the moon so that Wallace can sample the different cheeses of which the moon is made. However, this “cheese holiday” isn’t free of trouble when they encounter a stove-like contraption. This moon resident wants to go back to earth with them so that it can ski.

A Grand Day Out is a bit technically inferior to the Wallace & Gromit films that would follow it, but its charm lies in the short’s imaginative settings and the fantastical execution of its scenario. There is lots of charm here, and Wallace & Gromit: A Grand Day Out (also known as A Grand Day Out with Wallace & Gromit) shares something with the great fantasy films like The Wizard of Oz and classic Disney animated films, which is a sense of wonder that can capture the heart of young and old viewers alike.