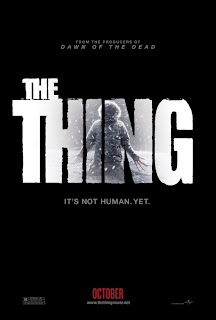 One thing that becomes clearer to a budding writer as he or she develops writing skills is the importance of conflict. Sometimes horror movies are less about conflict than they are about cheap scares.

Who Goes There? is a novella written by John W. Campbell, Jr. under the pen name Don A. Stuart. It was first published in the August 1938 issue of Astounding Science Fiction. The story is about group of scientific researchers in Antarctica and their encounter with an alien that assumes the shape, memories, and personality of any living thing it devours. The Howard Hawks/Christian Nyby film, The Thing from Another World (1951), is a loose adaptation of the Who Goes There? The 1982 John Carpenter movie, The Thing, was a remake of the 1951 film, but Carpenter’s version (written by Bill Lancaster) was more faithful to Campbell’s novella. There is a third film adaptation of Who Goes There?

The Thing is a 2011 science fiction horror film that acts as a prequel to the events depicted in Carpenter’s 1982 film. Not only are the Hawks and Carpenter films among my favorite movies, but I also consider them two of the great science fiction and horror movies of all time. The Thing 2011 pits scientists against a sneaky alien menace, but much of the movie lacks conflict or struggle.

The Thing 2011 is set in and around Thule Station, a Norwegian research station in Antarctica. The scientists and researchers at the station have just discovered a spacecraft buried deep beneath the ice. One of the scientists recruits American paleontologist, Kate Lloyd (Mary Elizabeth Winstead), to come to Thule, where Kate learns that the scientists have also discovered a survivor from the spacecraft buried in the ice. The scientists return the alien to the station in a block of ice, but they soon learn that the alien is still alive. Now, it is consuming and replicating people in the station, and Kate seems to be the only one who truly understands the situation. But will she be able to tell the difference between the real humans and the copies?

The Thing 2011, directed by Matthijs van Heijningen Jr., is loving and respectful of John Carpenter’s 1982 film. In some ways, Heijningen’s film is as much a remake of Carpenter’s film as it is a prequel, but I think that’s why the new film comes out being a fairly average science fiction horror film. The first hour of this movie seems like nothing more than procedure, as if the director and screenwriter were more determined to set up a scenario rather than tell a story. I could feel the weight of Carpenter’s classic film weighing down the narrative of this new movie. Perhaps, Universal Pictures would have been better off remaking Carpenter’s movie or making (dare I say) the more daring choice and producing a sequel to the 1982 movie.

It doesn’t help that the characters are not interesting. They seem like a bunch of dull people standing around a boring party hoping that something will happen to liven up things. That “something” is the alien, and when it finally starts attacking like a mad-monster big dog, Kate and a few other characters suddenly seem interesting. That’s because the story finally embraces conflict and struggle. The human/alien conflict creates a struggle to live, and when human characters struggle to live in fiction, we pretty much always pull for them. The alien’s struggle to survive (which means killing humans) certainly makes the story more interesting.

When there is no conflict, the movie is a bust, but for about 20 minutes during this movie’s second half, it is actually first-rate science fiction-horror. Then, it starts to misfire again, alternating ridiculous and cool. The Thing has such cheap scares as what’s-around-the-corner, the monster attacks, and the ambiguous shadows, etc. There is potential here, but most of it is wasted. The Thing 2011 is mostly just an awkward love letter to a better movie, so please watch John Carpenter’s The Thing, if you haven’t seen it already. Or if you have, see it again; it’s always a pleasure to watch.