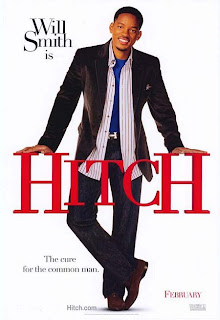 The subject of this movie review is Hitch, the 2005 romantic comedy starring Will Smith. In the film, directed by Andy Tennant, Smith plays a professional matchmaker.

Alex “Hitch” Hitchens (Will Smith) is a professional “date doctor,” who helps mostly shy, insecure, and nervous men learn to be confident enough to date the woman they just can’t get out their minds. His biggest project is to help a pleasantly plumb accountant named Albert (Kevin James) find his confidence so that he can woo his employer’s biggest client, wealthy playgirl, Allegra Cole (Amber Valletta). Hitch runs into his own complications when he becomes smitten with Sara (Eva Mendes), a New York gossip columnist. Both Hitch and Sara have dating issues, especially Sara, who usually erects an impenetrable wall whenever a man attempts to be friendly with her. However, Sara is determined to discover and publicize the identity of the mysterious “date doctor” about whom she’s been hearing in relation to the Allegra-Albert romance, even if it costs her personally.

Early reviews of the film suggest that Hitch is a trifle and a bit a fluff that Will Smith manages to save with his endearing film personality. Hitch is lightweight subject matter, but Will Smith and his co-conspirators make this a winning romantic comedy and comic romance. It’s not as good as When Harry Met Sally, but there is a lot more meat on Hitch’s film bones than on most romantic comedies about mismatches and misunderstandings. Will Smith does give this film vibrant life because he is a fine actor and a radiant movie star. He is comfortable and super confident on the big screen, and the camera loves him. If Denzel Washington is the heir to Sidney Portier, then, Smith is the black Cary Grant.

The rest of the cast, however, does it part. Eva Mendes is more like a co-star than supporting player. She carries this film, and there is an air about her that suggests she can go toe to toe with a man in the vein of Katherine Hepburn. No, Ms. Mendes isn’t yet as good as Ms. Hepburn, but she seems headed in the direction of being a movie star because in this film, she shows that she can carry a lead role by making her end of the story as engaging as that of the central character.

Kevin James is surprisingly delightful. I like him, but I’ve never quite enjoyed his CBS television comedy series, “The King of Queens.” James usually plays charming, fat guys, and everyone seems to love a fat guy who can make fun of himself. James is also witty and sarcastic; his self-effacing tendency and smart alec cool serves him well in Hitch, making him a scene-stealer.

After spending years directing episodic TV, director Andy Tennant has worked mostly on romantic comedies, Sweet Home Alabama being his biggest hit to date. At present, Hitch may be his best work as he took Kevin Bisch’s funny script and made it into a high-energy comic romp of misunderstandings and dating chess matches. Some might see this as a “chick flick,” but Hitch is simply funny. Like many films, the ending is too sweet by a mile. Still, it works, and Will Smith has another winner.