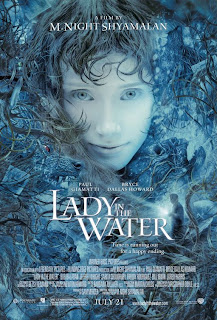 M. Night Shyamalan’s films have been thoughtful and profound. His characters fight pitched battles with their inner demons as they wage war with the outside forces that would destroy or enslave them. We’ve seen that in everything from the heart-rending ghost story, The Sixth Sense, to the story of a lapsed minister who finds his way back to his faith while battling an alien invasion in the 2002 hit film, Signs. Shyamalan’s films are also known for their twist endings – surprising finales that not only change the tone of the film, but also frustrate audiences who bought into one kind of story and find a shock ending ruins their expectations – Unbreakable (2000) and The Village (2004) being the best (or worst) examples.

In his new film, Lady in the Water, Shyamalan eschews the twist ending for a yarn that can be taken figuratively as a fairytale or literally as a tale of people who find their destiny in a fairytale made real. Or maybe the viewer can see it as both figurative and literal. Regardless of how one views it, Lady in the Water is one of the most lovely and heartfelt tales told in recent years – a thing as beautiful as its sparkling blue movie poster.

Modest and humble, Cleveland Heep (Paul Giamatti, in a performance that solidifies his place as a great American actor), manages an apartment building named “The Cove.” One night Cleveland is investigating the noises from the apartment’s swimming pool when he falls in by accident. He awakens to find that a pale, young woman with deep blue eyes, who says her name is Story (Bryce Dallas Howard), has rescued him from drowning. Cleveland discovers that Story is a “narf,” a creature from an old bedtime story, and she is trying to make the treacherous journey from our world back to her own, the “Blue World.” Cleveland and the rest of The Cove’s collection of oddball tenants realize that they have suddenly been drawn into Story’s fable. Young Soon (Cindy Cheung), a go-getter college student, Mr. Dury (Jeffrey Wright), a serene crossword puzzle fanatic and his son, Joey (Noah Gray-Cabey), Mr. Leeds (Bill Irwin), a housebound TV watcher, and Vick (M. Night Shyamalan), a writer and Anna Ran (Sarita Choudhury), his talkative sister, among many others, accept this strange story of which they are a part. With their help, Cleveland must protect this fragile young woman from a deadly creature hell-bent on keeping Story from returning home.

By now, many reviewers and audiences have turned on Shyamalan for this picture. However, where others see Lady in the Water as boring or mystifying, I see it has a simple fairytale. Yes, Shyamalan’s script is a bit artsy and pretentious at times, and the story (based upon a bedtime tale he wrote for his children) is stretched to the breaking point and challenges credibility. Still, for all that we might take it literally, much of the story is symbolic The characters, setting, and incidents are meant to remind us of a bedtime story, or to put it bluntly – “Once upon a time... Lady in the Water is a metaphor about people taking up their place in destiny, of the difficulty in taking up the journey to get to one’s place, and that each person does indeed have a purpose.

While the subject matter and characters might not make sense on the surface, they and the tale in which they exist have a deeper meaning. We’re supposed to see past the trappings and see the core – lives driven by purpose for the good of humanity. In Lady in the Water, the title character, but especially Cleveland Heep, have to break out of the protective shells they’ve made for themselves using their own fears, grief, and insecurities as building material. Thus, it’s no wonder that the other characters were so quick to embrace their part in this bedtime story – they’ve also hungered for a life of meaning. An enchanting fairytale filled with magical characters and dark fantasy, Lady in the Water is the most meaningful fable mainstream Hollywood has given us in a very long time.