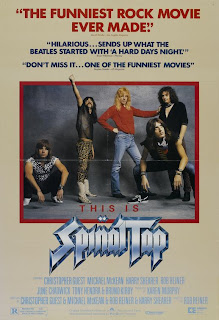 The subject of this review is This is Spinal Tap, a faux documentary that parodies rock documentary films. Directed by Rob Reiner, the film also satirizes the behavior and attitudes of members of hard rock and heavy metal bands.

This is Spinal Tap basically says that, “It’s time to get personal with one of music history’s greatest and loudest rock bands… Spinal Tap.” Documentary filmmaker Marty DiBergi (Rob Reiner) is making a “rockumentary,” a rock documentary of the band’s 1982 tour in support of the release of its 15th album, but the band has falling on some hard times. They’re playing smaller venues in front of an ever-shrinking audience, and the band’s front men: guitarist/co-songwriter David St. Hubbins (Michael McKean), lead guitarist/co-songwriter Nigel Tufnel (Christopher Guest), and bassist Derek Smalls (Harry Shearer) are older and struggling with inner band turmoil. DiBergi’s documentary gives them a chance to talk about themselves, their history, and their music and gives the audience a behind the scenes look at rare footage and a chance to hear lots of music. Will Spinal Tap survive, or will we die laughing first?

This is Spinal Tap, Rob Reiner’s faux documentary, created a film genre, the “mockumentary” or mock documentary. This is Spinal Tap is a fake documentary that follows the life and times of an aged metal band on an less-than-successful American tour, and everyone involved, especially the band comes across as twits. They don’t, in all seriousness, see themselves as pathetically funny as they actually are. Reiner, Christopher Guest, Michael McKean, and Harry Shearer wrote all the songs for the fake band called Spinal Tap (which some movie audiences initial thought was a real band), and with the rest of the cast, adlibbed most of the dialogue.

Anyone with more than a passing knowledge of heavy metal music and the eccentricities of metal’s most famous practitioners will double over in laughter at this “behind the scenes” look at band infighting, groupies, cancelled concerts, impractical stage sets, musical and performance pretensions, tight pants, misogynistic music, and the long hair and makeup. Even if you don’t like music, This is Spinal Tab is still funny; in fact the magazine, Entertainment Weekly, named it the #1 cult film of all time.

The film’s strength is in the music; one is actors playing the front men are all competent musicians. Spinal Tap’s songs are so funny and so dead on rock and roll and heavy metal, that for all that they are satires of metal songs, they also work quite well as actually metal music. Great parodies have to work as the thing they are parodying; Mel Brooks has made a career on getting the setting right in such films as Young Frankenstein, which looked like the classic black and white Universal Studios Frankenstein films and Blazing Saddles, which looked and acted like a western. The film’s other strength is the cast. Everyone is so good at playing so many absurd situations and saying so many ridiculous things with the straightest faces, as if the entire Spinal Tap scenario were all real and serious. This is Spinal Tap is a must-see for lovers of comedy.