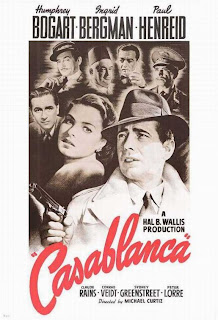 FILM-NOIR/DRAMA/ROMANCE with elements of thriller

The subject of this movie review is the 1942 American romantic drama film, Casablanca. Starring Humphrey Bogart and Ingrid Bergman, the film was apparently considered, at the time of its production, to be just another Hollywood movie.

Casablanca: some consider it to be the best American film ever made; the winner of the Oscar for “Best Picture” at the 1944 Academy Awards certainly has a place in my holy trinity. Directed by Michael Curtiz, who won the directing Oscar for helming this film, Casablanca is a beloved and popular movie, cherished by film fans, movie historians, and film critics throughout America – then and now.

In the story: Casablanca (a city in Morocco, a country in northwest Africa), circa 1941, is easy to enter, but much harder to leave – especially for people trying to escape the Nazi infestation of Europe. Living a life of exile in Casablanca is American Rick Blaine (Humphrey Bogart), who owns and operates Rick’s Café Américain. He’s a cynical man who sticks his neck out for no one, but his ex-lover Isla Lund (Ingrid Bergman) tests that rigid cynicism when she arrives in Casablanca with her husband, both on the run from Nazi persecutors.

Isla’s husband, Victor Laszlo (Paul Henreid), is on the top of the Nazi’s most wanted list. Victor and Isla came to Casablanca seeking the transit papers/official documents that would get them safe passage to Lisbon, Portugal, from where they could leave for America. From the USA, Victor could continue his work in support of the various European undergrounds fighting the Nazi’s. However, the papers have come into Rick’s possession, and his bitterness at Isla for suddenly and mysteriously leaving him some years ago after a whirlwind Paris love affair. So when Isla offers herself to Rick in exchange for Victor’s safe transport out of the country, the bitter and angry Rick must decide what’s important – his happiness, revenge, or the countless lives that hang in the balance and depend of Victor Laszlo’s safe passage.

What can I say that hasn’t been said. Casablanca was the right movie at the right time. It’s the consummate Hollywood production – superbly acted and directed, and filmed with beautiful production values, including art direction, set decoration, cinematography, and editing. The film’s popularity at the time has much to do with America’s involvement in World War II. The Allies invaded Casablanca in real life on November 8, 1942, and Warner Bros. premiered Casablanca in New York about three and half weeks later. By the time, of the film’s wide release in 1943, the real life city was still in the news, and the film captured the sense that the good guys (represented by Rick, Isla, and Victor) were at war with the bad guys (the Nazi’s, best represented in the film by Major Strasser, played by Conrad Veidt), mirroring American’s situation. The semi-tragic romantic triangle of Rick, Isla, and Victor, the intense drama, the fictional Casablanca’s atmosphere of intrigue and danger all came touched audiences and continues to.

The miracle, considering that Casablanca began filming without a completed script and went through the usual casting difficulties, is not really that the film was popular then (it was, after all, topical), but is instead that the film remains a favorite and outshines most of the great films made after its release nearly 63 years ago.

Posted by Leroy Douresseaux at 7:20 AM