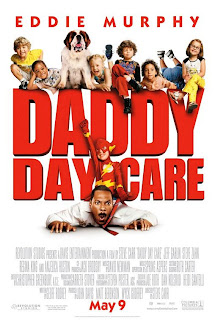 COMEDY/FAMILY with elements of fantasy

Once upon a time Eddie Murphy starred in movies people couldn’t get enough of like Trading Places and Beverly Hills Cop. Then, according to bigoted critics, Murphy turned his back on his “white audience” with films like Harlem Nights and Boomerang, which were not blockbusters but were nevertheless both excellent films featuring mostly African-American casts. Since the mid-90’s Murphy has starred in a number of “family-oriented” films that have been huge hits: The Nutty Professor, Mulan, Dr. Doolittle, and Shrek, etc. Frankly, I wouldn’t mind a combination of the star that appeared in Trading Places and Boomerang, but I can deal with the family friendly fare like Murphy’s recent hit, Daddy Day Care.

Charlie Hinton (Eddie Murphy) and Phil (Jeff Garlin) are laid off (fired) from their well paying jobs. As the weeks of being unemployed blow by they are spending more time with their sons, not that that’s a bad thing; they’re just not used to being employed. Like a light bulb exploding in his head, Charlie gets the idea of opening a daycare center, partly because he can no longer afford the posh Chapman Academy his son was attending when he was working. After initial skepticism, a growing number of mothers begin to rely on the affordable care that Charlie and Phil provide. However, the Chapman dowager, Mrs. Haridan (Anjelica Huston), doesn’t like the competition and schemes to have Charlie and Phil’s increasingly popular Daddy Day Care closed.

There’s no point in beating around the bush. Daddy Day Care is an entertainment delivery vehicle meant to give the “family audience” a few chuckles while affirming the bushy middle-class, suburban lifestyle. If that’s sounds like a criticism, it isn’t, not quiet. It’s simply that this film doesn’t have to be so vapid. Even the menace of Mrs. Haridan’s attempt to close the school is at best a lukewarm threat. If not for Ms. Huston’s ability to chew into even the most cardboard cutout characters, there would have been no dramatic tension in this film. The two male leads have lost their well-paying jobs, for chrissakes. That resonates with much of the audience in these shaky-as-ever economic times. Hell yeah, there are lots of laughs; I certainly found many, but this film could have been about something – about two dads struggling with new roles, roles men are not used to playing.

Oh well, I don’t regret seeing Daddy Day Care, and there are lots of warm and fuzzy feelings. It’s a safe trip to the movies for the entire family. Steve Zahn as Marvin, Daddy Day Care’s first new employee is an absolute show stealing delight. Impossible as it might seem, I like him more each time I see him in a movie. His inspired performance and off-kilter character were more than worth my time.

P.S. Two characters speak Klingon (a language from the Star Trek television and film franchise, for those who don’t know) in this movie; that alone is worth $1 of your admission price.