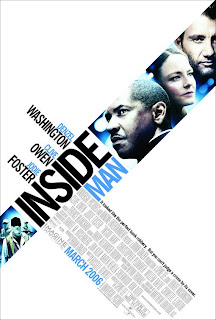 DRAMA/CRIME with elements of a thriller

Inside Man is a 2006 crime drama from director Spike Lee. Lee was basically a director-for-hire of this story of a peculiar bank heist, which was originally going to be directed by Ron Howard.

Four people dressed in painters outfits march into the Manhattan Trust Bank and take 50 customers and employees hostage, and then put the bank under a surgically planned siege. Detective Keith Frazier (Denzel Washington) and Detective Bill Mitchell (Chiwetel Ejiofor) are dispatched to the seemingly airtight heist by their precinct captain, with Frazier acting as the hostage negotiator. Frazier is hopeful of resolving the situation quickly, but Dalton Russell (Clive Owen), the bank robbers’ leader, is exceedingly clever, uncannily calm, and totally in command. Not only does he manage to disorient his hostages, but he’s also managing to confuse the police and stall for time.

Meanwhile, the bank’s chairman of the board of directors (ostensibly the owner), Arthur Case (Christopher Plummer), has used his vast and considerable political connections to arrange a meeting between Madeline White (Jodie Foster), a shadowy power player, and Russell – much to the chagrin of Detective Frazier. White is vague with Frazier about what she and Russell discuss during their brief meeting, but it seems as if looting a bank full of money isn’t Russell’s only objective. Detective Frazier needs to unravel this puzzle though, because he’s running out of time to keep this standoff from turning ugly and bloody for both hostages and hostage takers. The police high command is about to unleash Emergency Services Unit (ESU) Captain John Darius (Willem Dafoe) and his tactical unit to go in and settle the situation – to kill if necessary - and Frazier still isn’t sure just who is pulling the invisible strings of this strange case.

Inside Man may be Spike Lee’s most purely enjoyable film to date, being that it is almost totally free of his usual political drama and social commentary. The film is clever and Spike expertly extracts the unexpected turns and labyrinthine twists of writer Russell Gewirtz’s script. Lee adds the big time gloss to Gewirtz’s screenplay, his first produced for the big screen (He’d previously written for the late ABC TV series “Blind Justice.”). Lee makes the plot’s crafty tricks practical for a movie aimed at a broad audience.

Gewirtz’s script is rife with good characters, but it is obviously up to the director to set the tone and the actors to create by giving flesh to the concepts. There’s a natural humor to the characters, especially in their dialogue, and Lee allows that to play out, which brings the right amount of levity to this crime drama – a nice touch since this bank heist/hostage situation really isn’t about blood, guts, and guns. Lee also makes the most of the match of wits or chess game between Clive Owen’s Dalton Russell and Denzel Washington’s Keith Frazier.

This is the fourth collaboration between Spike and Denzel, after Mo’ Better Blues, Malcolm X, and He Got Game. Lee also seems familiar with Clive Owen, as he comfortable taps into Owen’s understated air of menace – the charming rogue. Jodie Foster makes the most of her part and creates an adversary that engages the audience as much as she engages the other characters. Foster’s Madeline White is a charming reptile; like the actress, the character has a natural intelligence that is obvious the first time someone meets her, but Foster adds the twist of making Madeline the perfect trouble-shooting witch.

Still, Inside Man is a bit too clever for its own good. Gewirtz never really taps into the raw emotional power of the devastating secret at the heart of his heist story, and Lee seems more in love with the shiny bauble the plot is, with all its unexpected shifts and revelations in the narrative, than he is with the consequences of malfeasance and with genuine evil. As a police procedural and heist film, Inside Man is as crafty as its colorful cast of cunning and wily characters makes it, and that’s craftiness by the carload – enough to keep your mind fighting with the puzzle for just about all of this film. The last 20 minutes or so of Inside Man is a bit of a stumble, as the filmmakers avoid the meat of an ugly subject matter, but getting to the end was still fun to watch.

Once upon a time – not that long ago – Spike would have readily ignored the genre aspects of this story in favor of tackling the issues of bigotry, public corruption, and appalling evil this story raises. Oh, well. At least he proved that he can be a very capable director-for-hire.