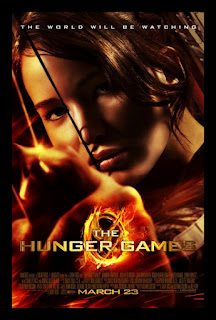 The subject of this movie review is The Hunger Games, a 2012 dystopian science fiction film. Directed by Gary Ross, the film is based upon Suzanne Collins’ 2008 novel, The Hunger Games, which is the first novel in The Hunger Games trilogy. The film is set in a future in which teenagers fight to death on live television, and the story follows a 16-year-old young woman who volunteers to participate. Of note: Oscar-winning director Steven Soderbergh served as a second unit director on this movie.

The Hunger Games takes place in a post-apocalyptic future, and what was once North America is now the nation of Panem. Panem is composed of 12 districts and The Capitol, which rules over the districts. Every year, The Capitol takes one boy and one girl from each of the 12 districts to become contestants or tributes in The Hunger Games. Part entertainment and part intimidation of the 12 districts, these games are broadcast throughout Panem, and the 24 participants must fight to the death until only one of them remains alive – the victor.

Katniss Everdeen (Jennifer Lawrence) is a 16-year-old teen living in the impoverished District 12. During the raffle to choose the district’s tributes, Katniss volunteers to take her sister’s place as a girl tribute in the 74th Hunger Games. Along with District 12’s boy tribute, Peeta Mellark (Josh Hutcherson), Katniss travels to the decadent Capitol for the fight of her life.

I can say without reservation that The Hunger Games captures the sense of the life and death struggle of Katniss and her competitors. This is a science fiction film that is driven by character and intimate man vs. man confrontation – from sudden romance and friendship to cold-bloodied murder and assorted calculated cruelties. Not having the narrative space the novel has, the script efficiently depicts both the devastating poverty of District 12 and the detached self-indulgence and shameless plentitude of The Capitol.

However, Jennifer Lawrence is everything for this movie. Whatever problems this film may have, Lawrence’s skill-set as an actor delivers a performance that glosses over narrative and cinematic glitches. Pardon my lack of articulation, but homegirl is real. Here realness is why Lawrence comes across as genuine as a backwoods girl who fights to feed and house her younger siblings while the very hillbilly drug marketplace that killed her father is coming for her. In the series of scenes in The Hunger Games that takes Katniss from the moments before the battlefield to the start of the 74th Hunger Game, Lawrence sells Katniss’ nervousness. Her fear is palatable, and Lawrence uses her performance to transport us to the battlefield with Katniss.

There are other good performances. Of course, Stanley Tucci is good, but his goodness is breathtaking as the scary host with the most, Caesar Flickerman. Lenny Kravitz gives such a good turn as Katniss’ mentor, Cinna, that he leaves you wanting more. Still, Jennifer Lawrence is the show. She is to The Hunger Games what Robert De Niro is to Raging Bull, the star actor that makes a regular film into something special.