As a Sequel, "The Whole Ten Yards" is an Incomplete Pass 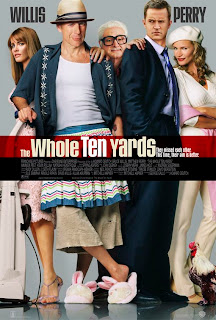 The Whole Ten Yards is a 2004 crime comedy. It is also a sequel to the 2000 film, The Whole Nine Yards, a title derived from the popular expression that means completely and everything.

Many critics have already asked, “Why is there a sequel to 2000’s The Whole Nine Yards?” It’s a legitimate question. Nine Yards was a nice crime comedy and caper film with some really neat characters, but half the really good ones bit the bullet or were looking at jail time by the end of the film. Who knows why The Whole Ten Yards exists, but it’s a fairly decent film with a lot of belly laughs, although its plot is almost nonexistent and the script lumbers around like a shooting victim on weak legs.

Lazlo Gogolak (Kevin Pollack) is just out of prison, and he’s looking for his son Yanni’s killer. Yanni (also played by Pollack in the first film) was one of those funny characters that got whacked in Nine Yards. Lazlo knows the killer is Jimmy “The Tulip” Tudeski (Bruce Willis), but he also knows Jimmy is hiding somewhere. So Lazlo finds the next best thing, Jimmy’s former neighbor and the second husband of Jimmy’s ex-wife Cynthia (Natasha Henstridge). That would be hapless fall guy Nick Oseransky or Oz (Matthew Perry), as his friends call him.

When Lazlo kidnaps Cynthia, Oz runs to Jimmy for help and inadvertently leads Lazlo and his band of merry killer idiots to Jimmy’s hideaway in Mexico where he lives with his wife Jill (Amanda Peet), Oz’s former assistant and a budding contract killer. Things aren’t going well for Jimmy and Jill. They’re trying to have a baby, but Jimmy may be shooting blanks. Jimmy also has something Lazlo wants, and Lazlo has something Jimmy wants. Everyone’s playing everyone, and poor Oz, just like the last time, is caught in the middle.

There are numerous hilarious, laugh-out-loud scenes in The Whole Ten Yards. Ten Yards, however, is totally a character driven piece. The plot and story are crippled and confusing, and the story has too much subterfuge for its own good. Even as a character piece, this film feels stretched thin. The actors have to be “on” all the time, or the film will fall apart; thus, a lot of the comedy routines and scenes feel like they go on too long or they’re too over the top. Perry frantically bounces off the walls, but he mostly succeeds in making both his character endearing and the film viewable. Amanda Peet maintains the sexy energy she had the first time. Willis is good, but a lot of his scenes are poorly written and/or staged.

Poor Natasha Henstridge is wasted, as is Kevin Pollack. The Whole Ten Yards is not so much a wasted opportunity as it is a wasted effort. As funny as it can be in moments, it’s largely forgettable and you do have to wonder why it’s here. Still, it’ll make a good rental when you “just want something to watch.”