Brendan Gleeson Shines in "The Guard" 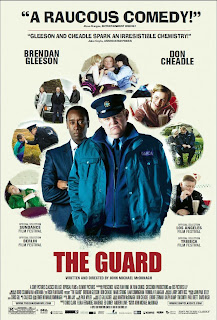 The Guard is a 2011 Irish crime comedy starring Brendan Gleeson and Don Cheadle (who is also one of the film’s executive producers). Written and directed by John Michael McDonagh (Ned Kelly), the film focuses on an unorthodox Garda (Irish policeman) and a tightly wound FBI agent in pursuit of international drug dealers.

Straight-laced FBI Special Agent Wendell Everett (Don Cheadle) arrives in Ireland on the trail of international drug dealers, specifically four suspects. Everett meets Sergeant Gerry Boyle (Brendan Gleeson), a wisecracking and confrontational local Garda from the village of Galway. Boyle may already have a lead on the drug smugglers, but he chooses to annoy the American instead of helping him. When the drug-related violence and murder get close to him, however, Boyle suddenly finds himself doing police work way beyond anything he has ever done before.

The Guard is a weird film. Perhaps, I did not expect an Irish film to be so quirky as to seem like a movie from Wes Anderson (Rushmore, The Royal Tennenbaums). This film is both a crime comedy and a black comedy, so it is violent and twisted. Also, every moment in the film that attempts to be poignant are sabotaged by the profane and scabrous.

Writer/director John Michael McDonagh gives the film satirical flourishes by poking fun at the Irish city of Dublin and also at the miscues of the highest law enforcement agencies in both the U.S. and the U.K. He defiantly fills his film with so many odd characters, like Eugene Moloney (Michael Og Lane), the weird kid obsessed with the Irish Republican Army (IRA), and a young odd duck who photographs crime scenes in loving, gruesome detail. That many eccentrics could ruin a movie, but McDonagh deftly keeps these characters and their strangeness in check.

He has to keep these characters under control so that they don’t stand in the way of Brendan Gleeson’s fragrantly pungent turn as Gerry Boyle. The verbally adroit Gleeson spits out the dialogue McDonagh wrote for him as if he were battling Eminem. It is a showy performance on the part of Gleeson, but he does it with such veteran ease that his seems natural. Boyle may be a loser living a crude life of lust and drink, but he isn’t doing it half-assed.

What keeps the film from being great is that it does not give us what its premise promises – a warped version of the buddy-cop movie. Gleeson and Don Cheadle are not together enough – for me, at least. When Cheadle’s Wendell Everett is with Gleeson’s Boyle, they seem perfectly matched for some mismatched comedy duo gold. The Guard only gives us Boyle/Everett in chopped up bits that never last that long, until the last act, which is a shame.

I must also note that I wish Mark Strong, Liam Cunningham, and David Wilmot’s villainous characters were more developed, as they could be the stars of their own movie. There is nothing wrong with The Guard focusing on Gleeson’s Boyle, but as the film’s final moments focus on Cheadle’s Everett, it becomes obvious that The Guard misses out on being a buddy-cop classic.