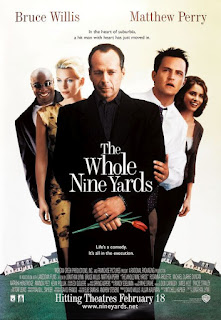 The Whole Nine Yards is a 2000 crime comedy starring Bruce Willis and Matthew Perry. The film focuses on a struggling dentist living in Montreal and his neighbor, a former mob hitman living under an assumed name.

Nicholas “Nick” or “Oz” Oseransky (Matthew Perry) is an American dentist living in Canada, struggling with his practice and suffering his monstrously selfish wife Sophie (Rosanna Arquette) and her tiresome mother (Carmen Ferland). His troubles start to pile when a hit man, Jimmy “The Tulip” Tudeski (Bruce Willis), moves into the neighborhood under the witness protection program.

Sophie figures Jimmy has a bounty placed on his head by whatever group he betrayed to the authorities. She forces Nick to go to Chicago and rat out Jimmy to Janni Pytor Gogolak (Kevin Pollack), a mob boss who has a score to settle with The Tulip. Sophie assumes that Gogolak will pay her husband a finder’s fee for locating The Tulip. But things are never so easy as one, two, three. Everyone, from Sophie to Jimmy and from Janni to Jimmy’s sexy wife, Cynthia (Natasha Henstridge), has a plan of his own, and poor Nick’s just a pawn. Will he survive them?

The Whole Nine Yards is both surprisingly funny and good; in fact, it’s probably one of the best crime comedies since Get Shorty. The film’s strength and quality lies in two things: the cast and the writing. Most of the stars are pretty good character actors, and they usually don’t get credit for being so, Bruce Willis especially. He’s a big time movie star and can generally carry a quality action flick. Put him in a quality ensemble piece, and he soars because he can play well off his colleagues. Amanda Peet has a sexy energy that livens the film, but the big surprise is Matthew Perry. He’s a funny guy, an expert at mixing sarcastic asides and pratfalls. He’s also quite good at playing the ordinary joe barely making it in extraordinary circumstances.

Mitchell Kapner’s script is light and breezy, but tightly written. It goes by quickly and smoothly, but it gives the cast a lot of room to play to their strengths. The sarcasm is nice, but Kapner’s feat is that he uses ugly violent crime and murderous characters to make a good comedy – a farce about mobsters, hit men, and cops, who despite the obvious differences in their respective professions, often act like the same people.