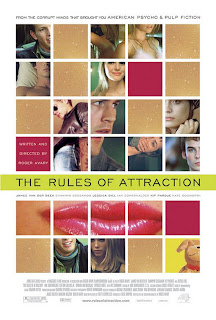 Roger Avary’s (who won an Oscar for co-writing Pulp Fiction) film The Rules of Attraction, an adaptation of Bret Easton Ellis’s novel of the same name, initially received an NC-17 rating before being edited to an R, and I have to say that I’d be afraid to see the “harsher” version that was too much for the tepid appetites of the MPAA rating board. It’s an apocalyptic love story about a love triangle involving three very self-absorbed students at a small New England college. It’s not for everyone, but it’s a bracing movie that throws safe filmmaking conventions to the wind and takes the viewer on a helter-skelter ride into the lust lives of hedonistic youth.

Paul Denton (Ian Somerhalder) is in love with Sean Bateman (James Van Der Beek, Varsity Blues, “Dawson’s Creek”), while Sean is in love with Lauren Hynde (Shannyn Sossamon) who is in love with the mostly absent Victor Johnson (Kip Pardue). Sean and Lauren manage to cobble up some kind of relationship, and while Sean really starts to dig Lauren, he can’t help but screw it up. Meanwhile, the beautiful, bisexual Paul has the extreme hots for Sean, but Sean barely even notices him. So Paul pursues; Sean pursues, and Lauren kind of pursues, but she’s in sort of a zone of indecision – attracted to Sean and pining for Victor.

The novel was apparently told from several points of view, so to keep that spirit, Avary breaks linear time, shifts between varying points of view, compares and contrasts POV, and allows interior communication between character and viewer. In Sean’s case, we get a jumble and confusing mess of interior monologues that serve to establish his inability to relate to others beyond his need of them. Avary gives the film the running theme of that no one really ever knows anyone else and that maybe people don’t really want other people to know them. And to ask another for such an intimate entry is looked upon as disingenuous. Each character is so caught up in his desire for his object of attraction that he never really tries to know that person.

The Rules of Attraction is a fascinating, satiric, and darkly comic look at attraction and at obtaining the object of attraction. If it has a fault, it’s is that the film lapses into small, but periodic dry spells and moments of pointless observation that stop the movie instead of moving the story forward. However, the acting is very good, particular Van Der Beek in one of those roles that supposed to show the world that the pretty boy actor can be grim and gritty.

If there are rules of attraction, no one here seems to know them; the characters seem to play it by the seats of the pants they’re so quick to drop. I love this film. It’s a stunning visual testament to the ugliness and unbridled power of pursuit, a love story that’s different yet uncomfortably familiar.

Posted by Leroy Douresseaux at 8:48 AM