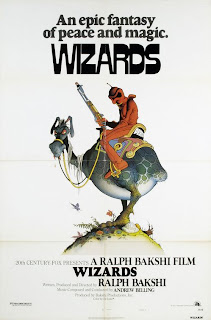 With very few Disney films to compete with his output in the 1970’s, Ralph Bakshi was certainly one of the best known directors of animation and one of the most controversial. Lacking the resources of an animation giant, Bakshi often had to be quite savvy in presenting his animated creations, mixing traditional cel animation with other techniques to make animated film, and that is the case with his 1977 film, Wizards.

Wizards is set on a post-apocalyptic Earth long after the horrors of a nuclear holocaust, when magic has returned to the earth. Avatar (Bob Holt), a good wizard, and his fairy folk comrades must battle Avatar’s evil brother Blackwolf (Steve Gravers), also a wizard, to save the world. Blackwolf has discovered a cache of 20th century weapons, tanks, and other long-forgotten instruments of war, as well as archival film footage of Adolf Hitler and of Nazi Germany. Blackwolf uses the Nazi propaganda films to whip his army of goblins and wraiths into a frenzy and sends them on to ravage Montagar, Avatar’s sanctuary of elves and fairies. Avatar, accompanied by a spirited young fairy-in-training Elinore (Jessie Welles) and a brave elf Weehawk (Richard Romanus) set off to Blackwolf’s kingdom of Scortch to stop him.

I liked the style of animation used in this film, which didn’t strive for realism, and was influenced by “underground” cartoonists, especially the work of the late Vaughn Bode. Bakshi also uses lots of rotoscoping, a process in which animators simply draw or add color over film footage to make it look “animated.” All the battle footage, including fighters, weapons, and tanks is simply hand drawing and coloring over footage from other war films or over archival documentary film. Coloring over film stock simply saved Bakshi and his crew from what would have been an impossible task, with their resources, of drawing battle scenes featuring hundreds of combatants and lots of weapons. However, what is drawn is very beautiful, and it really reminded me of cartoons and comic books. It’s not high-falutin,’ but it gives the tale a funky, out there feel. Some of the best work are the gorgeous still drawings by cartoonist Michael Ploog (who also did the storyboards for Michael Jackson’s “Smooth Criminal” video).

The story is a straight-on, blunt anti-war film. Wizards is a strong statement in the popularly held image of a hippie tradition against violence, hatred, and prejudice and for peace and love. Although it is not naïve, but it is an artistic statement based on seemingly impossible to reach ideals. I can’t help but respect what Bakshi did with this film; he delivered his message in an artistic medium that’s usually reserved for, at best, tepid commentary and for children’s entertainment, at least in American animation. The film drags a bit, and in the end, its ideal of a society based on love and peace is simplistic, underdeveloped, unrealistic, and impractical given human nature. But hey, it’s just a movie, right? However, because of the combination of the beautiful animation and colors and forceful delivery of its story about peace, Wizards is a unique film experience, unlike most live action films and most animated films you will ever see.