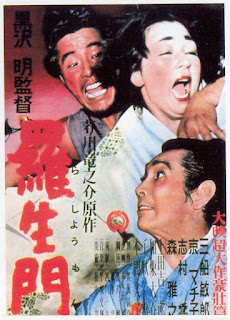 DRAMA/MYSTERY/CRIME with elements of a thriller

Rashômon is a 1950 Japanese crime drama from director Akira Kurosawa. In 1952, the film won an Honorary Academy Award as the best foreign language film released in the United States in 1951. The film is based on two stories by Ryunosuke Akutagawa and is the story of a murder told from differing points of view.

The fact that Akira Kurosawa’s Rashômon is considered by critics to be one of the best films ever made and that it is also one of the most influential films every made should be enough of a recommendation. However, I’m well aware of how put off many people are by “serious film” or movies that critics hail as masterpieces. Rashômon is simply a good movie, and virtually anyone who likes crime dramas or mysteries will love this philosophical and psychological thriller.

An incident involving the murder of a husband and the rape of the wife in the forest is reported to local authorities, but what really happened? The horrible incident is told from the point of view of four witnesses: the alleged murderer/rapist, the wife, the murdered husband (the husband’s spirit speaks through his wife as a medium, nonetheless), and someone who watched part of what happened from a hidden vantage point. Who is telling the truth, and, in this case, just what is truth?

One of the many wonderful things about this film, like all the great stories, is that it spins a good yarn while simultaneously examining the state of man. Why are people selfish? Why do they lie? And are all humans basically selfish creatures who (when it comes down to it) really serve their own individual interests? The film is a fine mystery/crime drama with some amazing twists and turns (the husband’s tortured spirit telling his side of the tale is unforgettable) that will keep the viewer riveted, but that it also makes you think about us, about humanity, pushes it over the top. Except that Rashômon seems a bit too slow from the top, it nears perfection in the art of cinema and in making good use of the medium.

NOTES:
1952 Academy Awards: 1 win: “Honorary Award” (Japan) – Voted by the Board of Governors as the most outstanding foreign language film released in the United States during 1951.

1953 BAFTA Awards: 1 nomination: “Best Film from any Source” (Japan)
Posted by Leroy Douresseaux at 8:15 AM