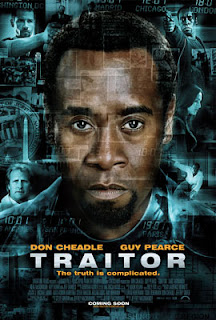 Traitor is a 2008 drama and thriller starring Don Cheadle. Based on an idea by Steve Martin (yes, that Steve Martin), who is also an executive producer on this film, Traitor focuses on a U.S. citizen turned terrorist and the FBI agent who is tracking him.

Born in Sudan and a naturalized Arabic-speaking, U.S. citizen, Samir Horn (Don Cheadle) is working as an arms dealer when he is arrested in Yemen and thrown in a Yemeni prison. There, he meets Omar (Saïd Taghmaoui), who is part of the Al-Nathir terrorist network. Omar befriends Samir, and after they escape from prison, Omar gets Samir to join the Islamic Brotherhood.

Meanwhile, FBI Special Agent Roy Clayton (Guy Pearce) has been hunting Samir, who is also former U.S. Special Operations Forces, through numerous countries. After he learns that Samir has returned to America, Clayton must discover the secrets behind this complicated man before the mysterious Risala Shukra Al-hiba event begins. Samir is a traitor, but exactly who or what is he betraying.

While it examines the beliefs and motivations behind terrorism, Traitor operates like a spy thriller similar to the 2010 Angelina Jolie film, Salt. Traitor is also a kind of dual procedural thriller, as it depicts how an FBI international terrorism investigation works and how terrorists plan (recruiting, financing, infiltrating, etc.). This is a film that seems to really know its subject matter. Of course, this is a bare-bones version of the inner workings of a terrorist organization, but the audience will get the idea that this movie isn’t something thrown together like an exploitation film.

Traitor has lots of twists and turns, and not only does it have one major reveal, but it also has a few big ones in the last half-hour, alone. Don Cheadle, who gives another high-quality performance, holds the story together, so this fast-moving narrative has dramatic heft. Sometimes, Traitor made me feel uncomfortable because it seems so plausible, and credit that to Cheadle’s performance. Traitor is his movie, and he makes it a good one. It also doesn’t hurt that the radiant Archie Panjabi appears in this film in a nice supporting role.