The Empty Calories of "Into the Blue" are Surprisingly Tasty 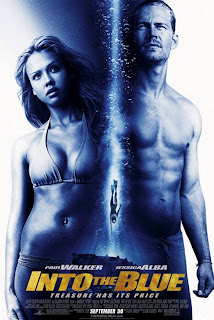 The subject of this movie review is Into the Blue, an underwater action movie and crime thriller starring Paul Walker and Jessica Alba. The film follows a group of friends who find both a sunken treasure and trouble from drug smugglers.

Recently fired from his job as a guide on scuba diving tour boat, Jared (Paul Walker) decides to pursue his dream of salvaging for lost treasure galleys in the deep, shark-infested waters of the Bahamas. His girlfriend, Sam (Jessica Alba), believes in him, of course, and is along for the ride, and so are his best friend, Bryce (Scott Caan), a young hotshot lawyer from New York City, and his latest conquest, Amanda (Ashley Scott), a young woman he just met a few days before. When the four young divers discover what may be a legendary shipwreck containing untold millions in gold, Jared believes his dream of finding buried treasure has come true.

However, near their salvage is a sunken plane containing the dead crew… and a large cargo of cocaine that may have a street value in the hundreds of millions. The friends make a vow to keep silent about both discoveries so that they can excavate the shipwreck and file a claim on it before rival treasure hunters (namely a challenger named Bates played by Josh Brolin) learn of their find and beat them to the gold. When two of the divers make a fatal decision regarding the cargo plane, drug smugglers looking for the plane turn the young treasure hunters into the hunted.

Into the Blue is the Sport’s Illustrated swimsuit issue version of a hard-edge action movie, but it has a campy edge that would make it suitable for the CBS Sunday Night Movie or a made-for-TV USA cable network action thriller; plus its PG-13 rating makes Into the Blue safe for all but those… well, 13-year olds. Director John Stockwell doesn’t turn Matt Johnson’s screenplay into a hyper-kinetic video game, but instead makes the film into a kind of crime film, imagine a R-rated, dumbed-down heist or caper film like Out of Sight for teens or for those who can’t stomach R-movie violence. Another good thing about Matt Johnson’s screenplay is that it emphasizes characters over action. Put a competent cast and crew behind a script like this and the audience gets a nice character-driven piece that makes the audience invest itself in the players – that’s Into the Blue. The script’s glaring error is that it seems stretched out, thus giving it a few huge dry patches in which the narrative is literally spinning its wheels or drowning.

Paul Walker (The Fast and the Furious franchise) and Jessica Alba aren’t close to being good actors. Walker comes from the Keanu Reeves school of acting, which means awkward and stiff dialogue delivery, but quite frankly, he’s beautiful and looks good on screen. His face can express more emotion that he ever could through speaking, and Walker’s eyes are indeed the windows into the soul of his characters. You learn just as much about what kind of man Jared is by watching Walker’s physical acting as you could by listening to Paul struggle with lines. Alba tries to be a serious actress, but her body is the Gromit to her acting’s Wallace. You don’t want her off screen; you want to see her, whether you’re a man or woman.

The setting and beautiful locations really sell this flick. I never thought I’d enjoy seeing people diving in and jumping out of the water so much (about 60 to 70 percent of the film); this is truly an underwater action/adventure. Add Josh Brolin’s Mephisto-like turn to the mix of lithe young bodies in motion, in danger, and in the water, and Into the Blue is a very entertaining thriller – fun in the water, the movie theatre, or at home.