Review: 2011 Version of "The Three Musketeers" is Silly, But Enjoyable Sci-Fi 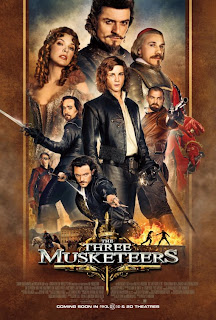 HISTORICAL/ACTION with elements of adventure, comedy and drama

The subject of this review is The Three Musketeers, a 3D action/adventure film from director Paul W.S. Anderson, perhaps best known for his work on the Resident Evil film franchise. Like all the other Musketeer films, this 2011 version is based upon Alexandre Dumas père’s 1844 novel, The Three Musketeers, but this new movie re-imagines and reworks the story by adding in science fiction and fantasy elements.

The 2011 film is much like the 1993 Walt Disney version (with Charlie Sheen and Kiefer Sutherland). Both are rollicking action films that are light and fluffy fare, although neither film is well-acted. Like the 1993 movie, the 2011 movie is fast, loose, and fun.

The Three Musketeers 2011 opens in Venice, Italy at the beginning of the 17th Century. The Three Musketeers: Athos (Matthew Macfadyen), Porthos (Ray Stevenson), and Aramis (Luke Evans), and Athos’ longtime lover, Milady de Winter (Milla Jovovich), go treasure hunting. However, the Duke of Buckingham (Orlando Bloom) arrives to spoil the fun. One year later, the disgraced Musketeers are in a funk when they meet the spunky young d’Artagnan (Logan Lerman) who arrives in Paris with dreams of becoming one of the Musketeers, the King of France’s personal guards.

Soon, d’Artagnan is part of the Musketeers rivalry with Count Richelieu (Christoph Waltz), the chief advisor to King Louis XIII of France (Freddie Fox). In fact, Richelieu has hatched a plot against Queen Anne (Juno Temple), part of a larger plot against France. Queen Anne’s lady-in-waiting, Constance Bonacieux (Gabriella Wilde), implores d’Artagnan to help the young Queen, and soon the Three Musketeers plus one are fighting over land, over sea, and in the sky to save France.

The script for this version of The Three Musketeers has some good ideas, but Paul W.S. Anderson’s direction often fails the film. Quite a bit of the movie has an awkward feel, and some elements, from the actors to the technical aspects, move like big, clumsy animals. Anderson clearly wants to make a film that is sly, clever, and sarcastic, but sometimes it comes across as ill at ease and flat.

The acting is also awkward, as if the performers are either having trouble speaking the dialogue or are trying to be intentionally too clever or too glib. That also sometimes falls flat. However, there is a swashbuckling fun that is inherent in the Musketeers films that lifts any Musketeers film above its faults. So I am not bewildered that I enjoyed The Three Musketeers 2011, and that I even wish for a sequel, which is not likely to happen.