"MirrorMask" a Trip to Wonderland and Oz 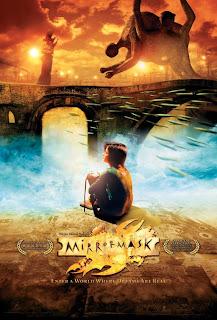 The subject of this movie review is MirrorMask, a 2005 fantasy film from Jim Henson Productions. The film, which has animated elements, is the story of a girl who gets trapped in a fantasy world.

Helena (Stephanie Leonidas) is a 15-year old girl who works unhappily in her mother (Gina McKee) and father’s (Rob Brydon) circus as a juggler, and she loves to draw strange creatures and lands. Helena has covered the walls of her bedroom with her drawings and illustrations. When her mother, Joanne, falls ill, Helena blames herself because she had, in a fit of pique, told her mother that she’d wished her mother dead if that’s what it would take for her to escape the circus.

Driven by sadness and worry over her mother’s health, Helena falls into a troubled sleep that finds her transported to the Dark Lands, a civilization equaled ruled by light and darkness. When the Light Queen (Gina McKee) looses her charm, the MirrorMask, to the Princess daughter (Stephanie Leonidas) of the Dark Queen (McKee), the kingdom, which is filled with bizarre giants, Monkeybirds, and a variety of dangerous sphinxes, was plunged into gloomy shadows. Helena, with the aid of a masked companion named Valentine (Jason Barry) takes it upon herself to find the MirrorMask and the Princess in order to restore the Dark Lands’ rightful balance.

MirrorMask is a low budget, live action/animation, fantasy film from the Jim Henson Company It was born from the minds of two of the biggest names in American and British comics books, artist/illustrator/photographer, Dave McKean, and comic book writer/best-selling novelist, Neil Gaiman. McKean has worked on such acclaimed comics books and graphic novels as Batman: Arkham Asylum (which he painted) and Cages (which he wrote and drew). Neil Gaiman is known as the writer/co-creator of DC Comic’s Sandman series that was published from the late 80’s to the early 90’s and won a World Fantasy Award. He’s written several novels and short stories, two of his biggest book successes being American Gods (the winner science fiction’s most prestigious prize, the Hugo Award for best novel) and the recent hit, Anansi Boys. McKean and Gaiman have collaborated several times, two of the best known being Signal to Noise, a graphic novel, and Mr. Punch, a picture book.

McKean designed the film’s outstanding and imaginative visual appearance and directed it, as well as creating the story with Gaiman, who wrote the screenplay. Although MirrorMask has a visual vocabulary, which can dazzle the mind, as well as the eye, the film is highly derivative in its conception. Visually the film looks like Dave McKean’s comix and illustrations with a nod to Tim Burton and Salvador Dali. It’s also very much like the film version of The Wizard of Oz with the same aggressive visual invention, but without Oz’s simple, yet effective script.

MirrorMask can scorch the eye with its glittery mixture of live action and animation, but the story, an allegory about denying who you are and mother/daughter relationships is chump change. I’d give the visuals anywhere from an 8 to a 10, but if I gave the script and storytelling a 4, I would be generous. MirrorMask’s dream world façade seems to be imagination and weirdness for the sake of weirdness, and it’s Freudian, pop-psychology is laughable. The acting, a combination of amateur video and mid-level stage professionalism only serves to show the script’s shortcomings. Gaiman’s screenplay has taken a short story and turned it into a movie that is about 41 minutes too long. The tale needs more supporting characters, and the villainess is a baddie only by de facto menace. And Stephanie Leonidas doesn’t look like a 15-year old girl, just a moody 20-something. Iain Bellamy’s jazz inflected score often manages to establish mood and setting when the Gaiman’s writing or the actors can’t.

However, I can’t discount the talent and vision that created a movie that looks so darn inventive. The creatures, the blend of animation and live action, the backdrops, and settings, the low budget computer animation that so perfectly fits this picture book-like movie, and the Dark Land’s curious denizens make me want to watch this movie repeatedly. Sometimes, McKean makes the film hard to see. There are too many shadows, too many scenes draped in blackness, and scenes that look as if they were shot through a drinking glass. But when you can see the action, you will be dazzled. Think of MirrorMask as the best-looking and most fanciful straight-to-video flick (it did have a short theatrical run) made to this point in cinematic history, and then get ready for something trippy and nice.