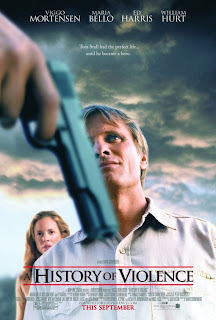 CRIME/DRAMA/MYSTERY with elements of a thriller

Tom Stall (Viggo Mortensen) is a pillar of the community in a rural Indiana town where he owns a small business, Stall’s Diner, and lives a quiet live with his wife, Edie (Maria Bello), and their two children, Jack (Ashton Holmes) and Sarah (Heidi Hayes). But the Stalls’ lives are forever changed after Tom thwarts a violent attempted robbery at the diner and kills the two, armed robbers. Lauded as a hero by his fellow townsfolk and by the media, he captures the attention of a Philadelphia mobster, Carl Fogarty (Ed Harris), and his henchmen who swear Tom is an old associate named Joey Cusack. It seems as if Fogarty wants Tom (or the man he swears is Joey) to tie up some loose ends…

In some ways, David Cronenberg’s new film, A History of Violence, is just like most violent crime dramas or action thrillers – the kind in which a man of few words tries to have a family and a peaceful life in a small town, but one day his violent history comes back to bite him on the ass. A good example of this sub-genre is the film noir (true) classic, Out of the Past with Robert Mitchum and Kirk Douglas, or even Clint Eastwood’s Oscar-winning Best Picture, Unforgiven. Like those two example of superb cinema, A History of Violence is contemplative. Where many directors would turn a movie crime drama into a hyper-kinetic music video, Cronenberg (who received a “Golden Palm” nomination at the 2005 Cannes Film Festival for this film) is almost painterly.

Bodies that are shot or mortally wounded in some other manner don’t fly off screen, nor do they disappear once used like some throw away special effects. We see humans rather than objects with gun shot wounds and nearly destroyed faces struggling to hold onto life. Cronenberg makes sure we hear the death rattle and the raspy, distressed breathing. Violence, even when justified, isn’t clean and pretty; there are real world consequences, as when Jack Stall badly beats two tormenting bullies at his high school. Cronenberg shows us chunks of flesh and some how that makes everything so visceral and more real, or maybe not so surreal, ethereal, and unreal as film violence normally is.

The performances are a mixed bag. Ed Harris and William Hurt shine with malicious glee in small, kooky roles. Maria Bello is sometimes, annoying and shrill, as Edie Stall, and sometimes she has moments where she is as earthy and authentic as a working woman with a family. Peter MacNeill as Sheriff Sam Carney is believable as the small town lawman who is as steady in the face of big city thugs as he is when dealing with his own people.

Still, this material truly stands out because of Cronenberg. The concept is pedestrian (almost pitiful), but screenwriter Josh Olson punches it up by creating weirdo and oddball characters and giving them quirky lines. Ultimately, Cronenberg is the ringmaster, or master chef, if you will, who makes this tale of a small town hero, who must face the vile and violent horror of his past, something a little different from the rest. A History of Violence is about the consequences of the past, and it’s too smart for pat resolutions; that only makes it special.