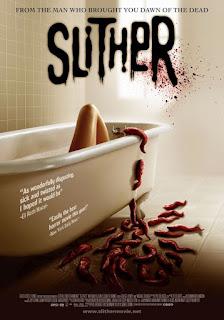 Screenwriter James Gunn has a diverse filmography of horror screenwriting credits, including Tromeo & Juliet (for famed B-movie studio, Troma Entertainment) and the 2002 TV-to-film, Scooby-Doo. In March of 2004, he became the first screenwriter in cinema history to write the back-to-back #1 movies at the weekend box office – for the “re-imagined” Dawn of the Dead (March 19) and Scooby-Doo 2: Monsters Unleashed (March 26). He takes his talent at cartoon scares, comic horror, and zombie movies and blends them into his debut as a writer/director, a creepy horror/comedy, Slither, that’s pure B-movie entertainment and that pulls no punches when it comes to gross out fun.

In the north woods town of Wheelsy, the redneck locals are preparing for deer hunting season, but something from the deep dark of outer space has crashed in the woods outside of town, and it’s ready to hunt in Wheelsy. When Grant Grant (Michael Rooker), one of the town’s richest citizens, starts acting strangely, his young wife, Starla (Elizabeth Banks), thinks that his behavior is something worse than what Grant says it is – a minor illness. When pets and livestock start turning up mutilated, Sheriff Bill Pardy (Nathan Fillion) and his deputies peg Grant as their prime suspect, but they’re all about to find out that Grant is now a blood-thirsty monster. Soon Bill and Starla (former childhood sweethearts) are battling scores of giant slugs. A teenaged girl, Kylie Strutemyer (Tania Saulnier), also discovers that her parents are acting like… zombies.

Gunn’s film is a retro horror flick, recalling the films of John Carpenter and David Cronenberg – most notably two 50’s era B-movies that each director remade into 80’s horror classics, Carpenter’s The Thing and Cronenberg’s The Fly. Like those two films, Slither features lots of blood and guts, with huge servings of slime and goo, and Slither is also an action film. There’s not much in here in the way of teenagers hiding from vengeful ghosts or lonely women dodging knife-wielding psychopaths. People are running, screaming, and sometimes shooting, but they’re fighting for their lives against monsters that see them as meat for food or warm flesh for breeding stock.

Gunn also paints his film with broad strokes of camp humor, but it’s not so humorous that we can’t take anyone of it seriously. Slither has plenty of belly laughs, but so much of this flick is creepy – even some scenes that don’t involve monsters. There’s something rotten and backwards in Wheelsy. The citizens are unabashedly backwoods and, if they aren’t inbred, they act and look it. Perhaps, this is Gunn’s gentle ode to that classic scary movie setting – horror in a lonely, isolated small town.

Anyway, Slither is just a darn good horror movie – something for the viewer who likes some laughs with his gore. The cast is clearly in the spirit of things. Also, in an age when so many monsters are created in computers, half of Slither’s special effects are practical special effects and prosthetics with CGI used only when necessary. So, the crowd that loved The Evil Dead movies and found laughter in The Texas Chainsaw Massacre (any of them) will find joy in this delightful flick that doesn’t deserve to disappear into horror movie oblivion.