"The Wrong Trousers" is the Right Thing 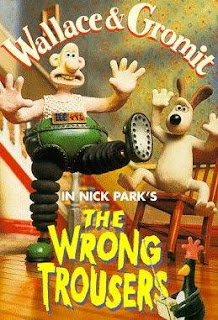 SHORT/ANIMATION/COMEDY/FAMILY/MYSTERY with elements of sci-fi

Wallace & Gromit in the Wrong Trousers is a 1993 stop-motion animated short film. In 1994, the film, also known as Wallace & Gromit: The Wrong Trousers, won an Oscar for “Best Short Film, Animated” and the BAFTA Award for “Best Animated Film.” Directed by Nick Park (who would go on to co-direct 2000’s Chicken Run for DreamWorks), the film is animated in stop-motion animation using clay figures. The public is familiar with this kind of animation under the brand name “Claymation.” This is the art of modeling characters and props out of clay and using stop-motion photography to give the illusion of the figures and props moving.

Wallace (voice of Peter Sallis) is the oddball inventor with an obsessive appetite for cheese and crackers, and Gromit is his nonchalant and patient dog, the smarter one of this duo. Wallace obviously loves his dog to the point of treating him like a spouse or a third hand (as if Gromit were a Wallace to Wallace’s Sherlock Holmes). Gromit actually keeps things organized and moving in the house.

In this film, Wallace discovers that he is low on finances, so he takes a tenant into his large home in order to get some extra money. However, his lodger, a beady-eyed penguin, is really the thief, Feathers McGraw. Soon, the sly, and silent penguin has moved into Gromit’s room, and has come between master and canine. McGraw’s real plan is to use the enormous mechanical, walking pants that Wallace gave Gromit for his birthday to rob a museum. It’s up to Gromit to save his master from these horribly wrong trousers and a scheming penguin.

There is no one reason to love the Wallace & Gromit cartoons. From the seamless stop-motion animation and to the smooth and easy pace of the story and from the instantly endearing leads to the unflustered way they tackle difficulties, there is something that just rings right about director Nick Park’s fabulous little animated shorts. Maybe, it’s because Wallace & Gromit: The Wrong Trousers is just practically perfect in every way.