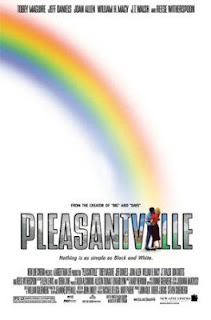 The subject of this movie review is Pleasantville, a 1998 comedy-drama and fantasy film from writer/director Gary Ross, who would go on to write and direct the Oscar-nominated, Seabiscuit (2003). Pleasantville stars Tobey Maguire and Reese Witherspoon as a brother and sister transported into their television set where they find themselves in the world of a 1950s black and white situation comedy.

It’s premise, especially the device that initiates the premise, is something straight out of pulp science fiction or pulp comics (in particular, EC comics), but Pleasantville ends up being a film poignant and delightful and thought provoking and entertaining. The film begins in the 1990’s with a brother and sister pair. David Wagner (Tobey Maguire), single, lonely, and unhappy, escapes his melancholy reality by watching the nostalgic 1950’s era soap opera, “Pleasantville.” After his TV breaks, a very strange repairman (Don Knott) gives him an equally strange remote control, but his sister, Jennifer (Reese Witherspoon), who is David’s exact opposite (happy and more far more sexually active than her brother), argues with David over watching the TV. During their struggle for the peculiar remote control, it transports the pair into the television to Pleasantville.

Suddenly, David and Jennifer are Bud and Mary-Sue Parker, and they find themselves completely assimilated into the new world. They are now black and white instead of color, and they have new 50’s era clothes. They also have new and different parents Betty (Joan Allen) and George Parker (William H. Macy), more pleasant than the old models. While David decides to blend in with this new world, Jennifer is sexually aggressive with the sexually naïve teenage boys of this “Leave it to Beaver” like world. David/Bud and Jennifer/Mary-Sue’s antics begin to change the world, and one thing leads to another and suddenly there is a vivid, red rose in this black and white world. Soon, the denizens of Pleasantville start to break rules and to break with long held traditions and before long, life is growing ever more colorful in Pleasantville. But not everyone is happy, including Bud and Mary-Sue’s Pleasantville dad and the town council, and they plan to do something about it.

There is so much to like about this movie, especially the wonderful cast. Tobey Maguire and Reese Witherspoon perfectly portray the squabbling pair of siblings, playing them at just the right pitch to make this movie work. However, it is the adult or older actors that sell Pleasantville’s ideas and messages. The themes of conformity, rebellion, marital discord, infidelity, betrayal, loyalty, and mob violence and group-think come to life in the stand out performances of William H. Macy, Joan Allen, Jeff Daniels and the late J.T. Walsh. It’s fun to watch Ms. Witherspoon’s antics, and Maguire has that young everyman quality that draws audiences into living vicariously through him, but the older actors shape and structure the elements that define this film.

Many Oscar® watchers had pegged this film as an early favorite to receive some big nominations, but it only earned three Academy Award nominations in the so-called technical categories. I get the feeling that many people were put off by the film. The very things that make it so intriguing – from its ideas to its concept start to fall apart about midway through the film. Slowly, but surely, the structure becomes shaky the longer the film runs. At 124 minutes (2 hours and 4 minutes) this film seems about 20 minutes too long. The last third of the film seems especially too preachy, too obvious, and heavy-handed.

Still, director/screenwriter Gary Ross created an enduring and charming gem; though flawed, it harks back to simply notions and an idealized simpler time in a fictional golden age. But the film does seem to ask, was that time really idealized and just how much is actually fiction about the good old days.