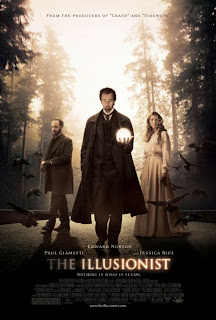 The subject of this movie review is The Illusionist, a 2006 period drama written and directed by Neil Burger. Burger loosely bases his screenplay on “Eisenheim the Illusionist,” a 1989 short story by Pulitzer Prize-winner, Steven Millhauser.

When he was a boy, Eduard Abramovicz (Aaron Johnson) fell in love with the Duchess Sophie von Teschen (Eleanor Tomlinson) an aristocrat well above his social standing. Her parents kept them apart, so Eduard left his home and traveled the world. Early 1900’s, Eduard returns to Vienna as Eisenheim the Illusionist (Edward Norton), an extraordinary conjurer and master magician. During one of his performances, Eisenheim fatefully encounters the Duchess (Jessica Biel), now a beautiful young woman engaged to marry Crown Prince Leopold (Rufus Sewell). Eisenheim employs his powers to win back her love, which is not necessary, as she never stopped loving him.

While Sophie is smitten with Eisenheim, Leopold feels threatened by the stage magician’s strange tricks, and attempts to apply cold logic to expose what he sees as Eisenheim’s scams. Leopold, however, has a history of abusing his female companions, and his apparent assault of Sophie during a jealous rage pits him against the illusionist extraordinaire in a duel of authority and stage magic. Caught in the middle of Eisenheim and Leopold’s feud is Chief Inspector Walter Uhl (Paul Giamatti), who deeply admires Eisenheim’s skills, but must serve Leopold if he wishes to advance socially and politically.

In his film, The Illusionist, director Neil Burger uses a mesmerizing performance by two-time Oscar nominee Edward Norton (Primal Fear, American History X) to deliver an enchanting supernatural mystery tale full of forbidden romance, imperial politics, and dazzling magic. Burger and cinematographer Dick Pope use autochrome photography to take the recognizable world and transfer it to the realm of mystery where everything is beautiful, but also has a disturbing undertone. Director and cinematographer saturate the world of The Illusionist in gold and green and then, allow the shadows to play ever so slightly on the edges of the picture’s frame. It’s a unique look that heightens the sense of magic, mystery, dreams, and that feeling of an otherness – the paranormal.

Not only did Burger build an enthralling world with his creative staff, but he also allowed his actors to play, guiding their considerable talents into selling this narrative. Paul Giamatti is excellent as the Chief Inspector Uhl, who admires Eisenheim, but is trapped between a rock and a hard place as Leopold’s strong-arm man. Giamatti wears his emotions on his face quite well – obvious, but with subtlety and grace, so he lets us see the struggle. Uhl admires Eisenheim even as he must control him. Sewell is super intense as Leopold, and he also allows to the audience to see the brilliant mind behind the face of a man with control issues. Jessica Biel is tolerable, but even her best moments seem weak compared to everyone else.

Still, this movie’s star is Edward Norton. Intelligent and intense, Norton always brings an air of elegance to his performances. Truthfully, he’s just too damn talented, and the fire of his abilities can burn through a weekly structured film. Here, there is no such problem. Norton’s Eisenheim is dark and mysterious, and we are drawn to this handsome creature who seems to have dark forces at play behind his placid face and his genial smile. Norton never lets us truly know Eisenheim, but he draws us to the character like moths to the magician’s exquisite flame. In the end, The Illusionist leaves so many questions unanswered, and it is indeed a great film that makes the viewer love the magic, mystery, and the great unknown of that which is supernatural. Neither The Illusionist nor its star character will let us know how a magician does “it,” but that won’t stop the audience from being spellbound and loving both.