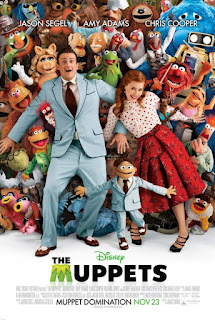 The Muppets is a 2011 live-action, musical comedy and fantasy film from Walt Disney Pictures. This Oscar-winning film stars The Muppets, the puppet characters created by the late Jim Henson, specifically the characters that appeared on the television series, “The Muppets” (1976-81). This film finds The Muppets reuniting to save their old theatre from a crooked oil tycoon.

Walter (voice of Peter Linz) is a man born as a Muppet. He lives in Smalltown (presumably a small town in the American Midwest) with his brother, Gary (Jason Segel). Gary has planned a vacation to Los Angeles with his girlfriend, Mary (Amy Adams), for their tenth anniversary, and he invites Walter along, so that he can tour the Muppet Studios.

Once in L.A., the trio finds the studio lot abandoned and Muppet Theatre decrepit. Walter happens to overhear Tex Richman (Chris Cooper), a greedy oil tycoon, plotting to seize control of Muppet Theatre, which he also plans to destroy. Walter, Gary, and Mary travel to the mansion of Kermit the Frog (Steve Whitmore), and convince him to reunite The Muppets. Kermit wants to put on a telethon to raise the ten million dollars needed to save Muppet Theatre, but The Muppets have not performed together in years and are scattered around the country. Even if Kermit reunites his friends, no television network thinks that The Muppets are still popular or relevant enough to give them the television time they will need to raise so much money.

With the release of The Muppets last year, I got a chance to rediscover my love for these characters. I watched the first television series, The Muppet Show, during its original run and later, in syndication for several years. I must say that I’m pleased with this new movie, which was critically well-received and performed well at the box office. For the most part, these are still The Muppets that I knew and loved and still love.

The new songs are better than I thought they would be. The beguiling, Elton John-esque “Man or Muppet” (written by Bret McKenzie) won a best original song Oscar, but I prefer two other McKenzie-penned songs. “Life’s a Happy Song” and “Me Party” (co-written by Paul Roemen) are the kind of catchy tunes that can stand on their own as lively jingles outside The Muppets (or even be used in another movie).

Early in the film, I found the characters played by Jason Segel and Amy Adams intolerable and intrusive. I was only a little more tolerant of nouveau-faux Muppet, Walter. As Segel’s Gary and Adams’ Mary recede more into the background and take their place as supporting characters, they grew on me… a little. Besides, I find it hard not to like Amy Adams. Truthfully, Gary, Mary, and Walter seem like minor gateway characters that create the contrivances which in turn bring The Muppets back into the picture. By the end of the movie, I liked that the new characters were part of the film.

Of course, the best thing in The Muppets are The Muppets. Whenever they’re singing and dancing and squabbling and trying to keep their stuff together, The Muppets have their mojo, and their mojo is back. By the end of The Muppets, I was sad because I wanted the movie to be longer.