Review: "The Debt" is Good, But Unfocused 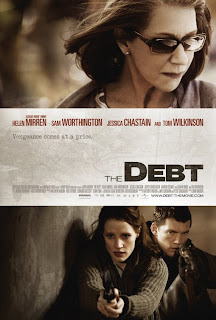 The Debt is a 2011 drama and espionage thriller from director John Madden. It is a remake of a 2007 film (directed by Assaf Bernstein) of the same name from Israel. In the 2011 film, a former Mossad intelligence agent relives a 1965 mission in which she and two other agents pursued a Nazi war criminal. At times quite riveting, The Debt often comes across as a broken movie because it tries to be different things at different times in the story.

In 1997, Rachel Singer (Helen Mirren), a former Mossad agent, and her ex-husband, Stefan Gold (Tom Wilkinson), who is still a Mossad agent, are celebrating a new book written by their daughter, Sarah Gold (Romi Aboulafia). Sarah’s book recounts a 1965 mission in which Rachel, Stefan, and another former Mossad agent, David Peretz (Ciarán Hinds), pursued a notorious Nazi war criminal. The trio targeted Dieter Vogel (Jesper Christensen), infamously known as “the Surgeon of Birkenau,” believed to be living in East Berlin.

The story flashes back to 1965 where we meet the younger versions of the trio: Rachel (Jessica Chastain), Stefan (Martin Csokas), and David (Sam Worthington). They find Vogel living as “Doktor Bernhardt” and operating an obstetrics and gynecology clinic in East Berlin. The team’s mission was eventually accomplished, or was it? Rachel must confront her past when two figures from it reemerge.

The Debt takes place across two different time periods, which I think inhibits the movie from sustaining suspense or building character relationships with any traction. The Debt certainly has potent moments, and the last act is a killer suspense thriller. Of course, any movie starring Helen Mirren and Tom Wilkinson would, at least, be interesting. I’m down to see anything with Mirren, and she doesn’t disappoint – once again, I mention that last act of this movie.

I see The Debt as a broken movie because it is really two films – one that takes place in 1965 and the other in 1997 – instead of being one complete narrative. That is what can happen to a movie that has so many flashbacks that it seems as if they are half the film. The Debt is good, but it would have better by focusing on 1965 or 1997 – not both.

Posted by Leroy Douresseaux at 10:03 AM