"If a Tree Falls..." Just One Story About the ELF 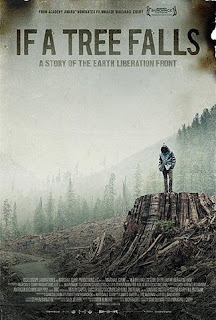 The film introduces the viewer to McGowan and explains his situation, as he awaits trial for his involvement in acts of arson that burned down a tree farm in Oregon and a research building at the University of Washington in 2001. Daniel recounts how he came to embrace environmental activism and how that led him to Oregon. There, he met like-minded individuals who believed in more direct confrontation when protesting for environmental causes. “More direct confrontation” often meant property damage, especially large scale acts of arson.

The film also explains the origins and motives of the ELF, as well as the methods they used against their adversaries. Their use of economic sabotage and what they considered guerilla warfare would get the ELF branded as eco-terrorists. The second half of the film details the F.B.I. investigation of McGowan and his associates and how law enforcement was able to discover their identities and arrest them. The film also examines larger questions about environmentalism, the effectiveness of activism, and the use of the word, “terrorism.”

As a film about Daniel McGowan, If a Tree Falls: A Story of the Earth Liberation Front, is a quality documentary drama. The filmmakers allow McGowan to tell his story, and he is both honest and articulate. This allows the viewer to get a sense of the man, his times, the places, and the events before, during, and after the ELF. Director Marshall Curry shows off his storytelling skills in the moments when the consequences of McGowan’s actions hit home – on him, the young woman who would become his wife, and his parents and siblings. His feelings of dread, boredom, helplessness, and fear, and also his family’s tears and grief can feel like a punch in gut.

The film’s title, If a Tree Falls: A Story of the Earth Liberation Front, is honest. This is “a story” about the ELF, not an all-encompassing take on the organization. Curry and his cohorts’ use Dan McGowan as a vehicle to tell a story about the ELF, but ultimately, this documentary is less about the group than it is about McGowan.

That is a bit disappointing, but who knows when and if any one filmmaker will be able to pierce the secretive organization’s veil wide enough to make a great film about the ELF. Although this is a good documentary, focusing on McGowan isn’t enough either to answer question about labeling activists as terrorists or to make If a Tree Falls: A Story of the Earth Liberation Front a great documentary. There just seems to be too much missing from it.