"Hugo" Captures the Magic of Movies 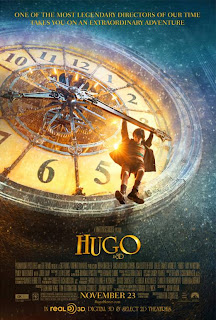 HISTORICAL/DRAMA/FAMILY with elements of fantasy

Hugo is a 2011 Oscar-winning historical drama and 3D adventure film directed by Martin Scorsese. The film is based upon The Invention of Hugo Cabret, a 2007 historical fiction novel by Brian Selznick. The film is about a boy who lives in the walls of a Paris train station and how he meets Georges Méliès, the real-life French film pioneer.

It is 1931, and 12-year-old Hugo Cabret (Asa Butterfield) takes care of the clocks at the Gare Montparnasse railway station in Paris. He lives in the walls of the station with his uncle, Claude Cabret (Ray Winstone), an alcoholic watchmaker who is responsible for maintaining the clocks at the station and who teaches the craft to Hugo. After his uncle disappears, Hugo fends for himself, stealing food and maintaining the clocks. Hugo has also taken on a project of his late father (Jude Law), repairing a broken automaton, a mechanical man that is supposed to write after he is wound.

To repair the automaton, Hugo steals mechanical parts from an elderly toy store owner. One day, the owner, Georges Méliès (Ben Kingsley), catches Hugo and takes the boy’s notebook, which has notes and drawings for fixing the automaton. To get his notebook back, Hugo begins working for Méliès and also befriends the old man’s goddaughter, Isabelle (Chloë Grace Moretz). The children’s friendship and curiosity lead to a shocking revelation that might restore the spirit of a forgotten artist.

I guess that I should not be surprised that Martin Scorsese could pull off a film like Hugo – what is basically a family movie. I know that not all Scorsese’s films involve mobsters and violence, for instance, The Last Temptation of Christ and The Aviator, but his films are generally edgy adult dramas. With Hugo, however, Scorsese drives this film not only with a child’s sense of wonder and curiosity, but also with a child’s grit and determination to do what they believe is the right thing.

Scorsese’s films are successful because he gets great performances from his actors, and these performances are sometimes what make his films special (Robert De Niro in Raging Bull), or memorable (Joe Pesci in Goodfellas), or legendary (De Niro in Taxi Driver). In Hugo, the actors are so upfront emotionally that their intentions are clear to the audience. This makes the characters honest and vulnerable, in a childlike way that makes them endearing. That is why Chloë Grace Moretz’s Isabelle comes across as refreshing and intriguing rather than just being the girl character intruding in a boy’s tale.

While Ben Kingsley’s name is listed first in the credits, Asa Butterfield is the film’s star and Hugo Cabret is the lead character. Unlike some child actors who pretend more than they act, Butterfield plays Hugo with a veteran movie actor’s chops. He makes Hugo whole and believable, so much so that I lied to myself that Hugo was real boy.

Speaking of Ben Kingsley: after decades of great performances, I should not be surprised at how good he is as Georges Méliès, but I am. Kingsley is shockingly intense, even in the scenes that are relatively quiet and low key. In the scene in which Méliès tells the story of his past, Kingsley’s voice takes on a life of its own and magically transports us to Georges Méliès’ golden age.

And Hugo is magical. It is a trip into our dreams, in which the past comes to life. Most of all, Hugo reminds us of why movies are so special.