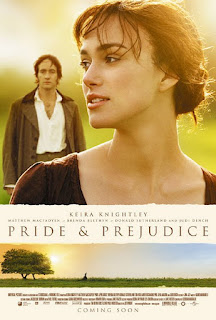 The subject of this movie review is Pride & Prejudice, a 2005 British romance film. This French-British production is an adaptation of Jane Austen’s novel, Pride and Prejudice, which was first published in 1813. The 2005 movie was the second time the book had been adapted as a feature film, while there have been numerous television adaptations, including a few in non-English speaking countries.

Mrs. Bennet (Brenda Blethyn) has five daughters: the radiantly beautiful Jane (Rosamund Pike, who is, of course, radiantly beautiful), the spirited Elizabeth or Lizzie (Keira Knightley), the feuding Mary (Talulah Riley) and Kitty (Carey Mulligan), and Lydia (Jena Malone), and the girls are well aware of their mother’s fixation on finding them husbands and securing their futures financially. Thus, begins a story of love, misunderstandings and class divisions in England in the 18th century.

The excitement and drama begins when a wealthy bachelor, Mr. Bingley (Simon Woods), takes up residence in a mansion near the Bennets’ home. Serene and beautiful, Jane catches the eye of Mr. Bingley. Meanwhile, Lizzie catches the eye of her distant cousin, Mr. Collins (Tom Hollander), who, as the nearest male relative, will inherit the Bennets’ home upon the death of Mr. Bennet (Donald Sutherland). Lizzie refuses his offer of marriage, with support of her father who dotes on her, but angers her mother.

Mr. Bingley has an even wealthier friend, the snobbish Mr. Darcy (Matthew Macfadyen). There is something between Lizzie and Mr. Darcy, but their many spirited and often quarrelsome encounters are not an encouragement for union. When Mr. Bingley abruptly leaves for London, Lizzie blames Mr. Darcy for contributing to what seemed like a likely marriage between Jane and Bingley. However, a crisis with the youngest daughter Lydia opens Lizzie’s eyes to what Mr. Darcy is really like. The fuss and confusion leaves no one unchanged, and forces each person to examine personal beliefs, but will it bring Mr. Bingley and Jane and Lizzie and Mr. Darcy together?

Working Title Films’ (Bridget Jones’s Diary, Love Actually) production of Pride & Prejudice is the first theatrical film version of Jane Austen’s classic 1813 novel in 65 years (since a 1940 film starring Greer Garson and Laurence Olivier). Director Joe Wright presents Austen’s novel of first impressions and the issues surrounding courtship and marriage among the landed gentry as a comic romance that satires the politics and procedures of engagements while still tugging at our heartstrings. If the film bears more than a striking resemblance to Ang Lee’s 1995 Jane Austen adaptation, Sense and Sensibility, it’s because Emma Thompson, who wrote and starred in that film, reportedly did extensive rewriting of Deborah Moggach’s screenplay for this film.

However, Sense and Sensibility was a somber drama with comic touches, while Pride and Prejudice is thoroughly romantic and comic. There are moments of serious contemplation and ugly class confrontation, but for the most part there’s comedy in the romantic goings-on. Dario Marianelli’s score, highlighted by lush and swirling piano melodies, capture both the mood of sweeping romance and sly comedy. The production values (costume, art direction, photography) juxtaposes the different environments: middle class and upper class, impeccably clean mansions and dusty middle class farmhouses with startling frankness that makes the audience understand how wide the division between classes was. It makes it easier to laugh at how Lizzie keeps missing the obvious about Mr. Darcy and at how Mr. Darcy seems so befuddled and clumsy for all that he shows arrogance and conceit on the surface. We can both laugh at and deeply appreciate Mrs. Bennet’s desperation in obtaining financial security for her daughters in the form of husbands who, if not well-to-do, have solid professions.

The performances are remarkable in that they fit a comedy so very well, although they would seem too light and flimsy were this straight drama. If Keira Knightley initially came across as wrong for the part in a Jane Austen adaptation, she proves that wrong. Her high-spirited, tomboyish persona and droll comic wit (which isn’t obvious unless you really pay attention to her in other movies) bring Lizzie to life as a fully realized, three-dimensional, rich character. Knightley understands the tone director Joe Wright set for his adaptation of Pride & Prejudice, and she meets it in this winning romance.