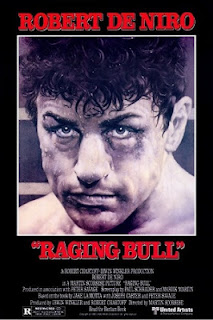 In 1980 and 81, Robert De Niro won several acting awards including the Oscar® for Best Actor in a Leading Role” for his portrayal of the boxer Jake La Motta in Martin Scorsese’s Raging Bull. Filmed in black and white, the movie harks back to classic Hollywood film noir and the black and white boxing telecasts Scorsese and cinematographer Michael Chapman grew up watching, “Friday Night Fights.” The film covers La Motta’s struggle to earn a middleweight title shot (which he would win) to his downfall as a middleweight boxing champion and the start of his career as a night club act when he middle-aged and overweight.

It took awhile for me to warm up to this film because all of the characters are so unlikable, even the ones who occasionally earn sympathy like La Motta’s wife Vickie (Cathy Moriarty in an Oscar® nominated supporting role) and his brother, Joey (Joe Pesci, in the film’s other Oscar® nominated supporting role). La Motta as a boxer was physically tough, but he was allegedly emotionally self-destructive, and hard headed i.e. mega stubborn. He severely physically and emotionally abused Vickie and Joey, and combined with his unreasonableness, it is easy to see why he was not liked, although he was and is respected as a boxer.

De Niro’s turn as La Motta is considered one of the top acting performances in the history of American and world cinema. He manages to make La Motta a total asshole, jerk, bully, maniac, psycho, but beneath all that is a man worthy of sympathy. La Motta is proud and stubborn, and guides his life by his own strict code of total machismo, and although he is (in the film) a paranoid chauvinist, he is the way he is because that’s how he survives. Being the man he is gets him to the top when everything and almost everyone works against him. That De Niro can make this man worthy of derision and admiration; that he can take a fictional version of a real person and make both the real and surreal worthy of respect is a work of art on De Niro’s part.

Scorsese has always been upset that Raging Bull did not win the Academy Award for Best Film, and many critics and film fans are still angry that Scorsese lost Best Director (to Robert Redford, nonetheless), Raging Bull is more the work of De Niro’s acting than it is of what Scorsese and the rest of the filmmakers (including editor Thelma Schoonmaker who also won an Oscar®) did. Don’t get me wrong because this is a very good film, and Scorcese put boxing on film like no one ever had and probably will ever again. However, the only thing great about Raging Bull is De Niro. Redford deserved his acclaim that year.