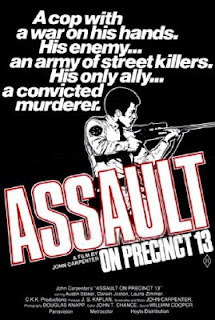 ACTION/THRILLER with elements of crime

John Carpenter’s second feature film, Assault on Precinct 13, has been called a cult classic; in fact, it’s also a favorite of director Quentin Tarantino. Early in the film, police ambush and kill six gang members, so other gang members make a blood pact to strike back at the police. After a grieving father kills one of those gang members for the murder of his young daughter, the gangsters track him to division 13 of precinct 9, a nearly abandoned police station that is in the process of being closed. More gang members join the initial group of thugs, and they lay siege to the station on its last night of operation. After the first two assaults on the station, one police officer, a dispatcher, and two convicts have to find a way to survive the gang onslaught in a building without power and phone, until someone comes to rescue them from what seems like an endless number of killers. But is anyone coming to help them?

Combining elements of Rio Bravo and Night of the Living Dead (1968), Assault on Precinct 13 is a unique and riveting crime thriller. Except for the sounds of the gun battles, the film is strangely quiet. The dialogue is never screamed, although the characters do yell on occasion. Carpenter only intermittently uses his ominous and somber score (which features a synthesizer), and the soundtrack is free on songs and radio tracks, whereas few current action movies are released without a soundtrack full of songs by popular rock, metal, and/or hip hop acts. This film is simultaneously dream-like and apocalyptic, a nightmare in which it seems that the end is a foregone conclusion for a small group of protagonists, no matter how much they might deserve to have someone save them.

The acting is stiff and often forced, but Carpenter wisely gets performances based on attitude in which the actors understand the importance of atmosphere and what they do serves the interests of the film rather than the art of their performance. The script also doesn’t have one, single antagonist, so the film lacks a good villain. While the gang members are good adversaries, they need a face – one character that personifies the bad guys.

As usual, Carpenter’s film includes subtle social satire and commentary covering everything from the breakdown of institutions, the inadequacy of social and municipal services, and the lack of professional accountability to urban decay, lawlessness, and incompetence. Assault on Precinct 13 is a brilliant, dark, and distinctively American film that stands the test of time because it was born of a time in American culture when people felt change was coming too fast and life was becoming too coarse. Thus, Assault on Precinct 13 will always touch a nerve.