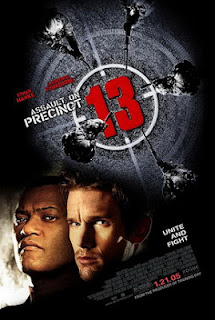 Assault on Precinct 13, the 2005 remake of the 1976 John Carpenter film, may lack the social commentary of the original, but it is a very entertaining action thriller that doesn’t try to break new ground in the tale of cops and criminals who must temporarily unite for their mutual survival. This new Assault on Precinct 13 is a by-the-books Hollywood effort that doesn’t throw any curve balls and sticks close to the original. The only thing the filmmakers wanted to go out on a limb for was to feature lots of gunshot wounds and even more kill shots to human heads. This is true R-rated action, and the film is proud of it. The actual assault on the precinct is full of sound and fury and smoke and blood – perfect for people who like the Lethal Weapon and Die Hard franchises.

Precinct 13 is a soon-to-close police station, and its last day, New Year’s Eve, is a snowy one. Stuck with the duty of closing the station one last time is Sgt. Jake Roenick (Ethan Hawke), who eight months earlier saw a drug bust go really bad and his two partners gunned down. He’s reluctant to be out on the street again, or so says his sexy therapist, Dr. Alex Sabian (Maria Bello). However, Jake is forced to again confront a heavy-duty assignment when a prison bus carrying four prisoners is forced by the intensifying snow storm to make a stop at Precinct 13. One of his new charges is the infamous Marion Bishop (Laurence Fishburne), recently taken into custody after killing a cop.

All Roenick has with him at the precinct is a skeleton crew, which consists of Iris Ferry (Drea de Matteo), a secretary, and Jasper O’Shea (Brian Dennehy), a copy on the verge of retiring, and none of them know that Bishop was in league with a band of dirty cops, who recently turned on him. They don’t want Bishop to live long enough to reveal their corruption, so they launch an assault on Precinct 13 to kill Bishop, and they don’t want any witnesses surviving. Now, Jake, Jasper, Iris, and Dr. Sabian must join forces with Bishop and the three other criminals: Beck (John Leguizamo), Smiley (Ja Rule), and Anna (Aisha Hinds), if they want to see sunrise.

In the original film, the audience knew next to nothing about the cast, and even less about the gang laying siege to the isolated precinct. The new screenplay gives us plenty about Jake Roenick, ostensibly the hero, including his (self-perceived) professional failures, so that we might root for him to overcome his personal challenges and demons and rise to the occasion. In the end, nothing about any character here rings true. The selling point of this tale is that a tiny band of good guys and some criminals, who look good compared to the ones trying to kill them, are seemingly cut off from civilization and from help and they’re facing a large band of relentless foes with numbers and weapons on their side. If the movie can get us to picture ourselves with the outgunned, the filmmakers have won half the battle, which the makers of Assault on Precinct 13 did. However, they only win a little of the rest of the battle, just enough to win the war, but win ugly.

Laurence Fishburne is a dashing movie star with plenty of charisma, enough to make up for the fact that he doesn’t have matinee looks. His presence wins every frame that he’s in here, but that hampers the film because the usually good Ethan Hawke doesn’t seem up to the challenge of matching Fishburne. Hawke’s performance is either flat or shrill, with only a few moments of truth (to which I desperately clung). It’s best to view this film the way one might the original. Don’t think about the characters; focus on the plot (which conceptually has more holes in it than the precinct after the assault), and still more on the setting. They’re the winning combination that overcomes hamstrung characters and pick-up-a-paycheck acting.

Posted by Leroy Douresseaux at 9:13 AM