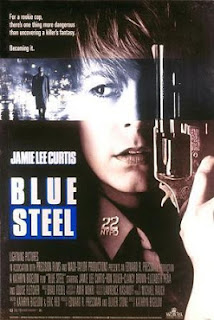 CRIME/THRILLER with elements of horror

Blue Steel was director Kathryn Bigelow’s third directorial effort (her second solo feature), and like her earlier mixed genre efforts, the film is a horror flick dressed in the clothes of a cop movie.

When rookie policewoman Megan Turner (Jamie Lee Curtis) shoots an armed robber during a holdup, one of the witnesses is Wall Street broker, Eugene Hunt (Ron Silver). A psychotic who hears voices talking to him, Hunt becomes obsessed with Megan. He cunningly removes the robber’s gun, and quietly leaves the store without Megan ever realizing he was there. Hunt carves her name on the bullets and begins a killing spree. Later, Megan meets Eugene, and he woos her into a budding romance, but his extreme mental illness causes him to reveal his crimes to Megan. However, virtually no one believes that he is the killer. As the deadly psychopath draws the young cop into a deadly game of wits, Megan thinks she’s one step ahead of him, but Hunt is much closer than she thinks.

Casting Jamie Lee Curtis as the rookie female policeman was a good move. Having spent much of her early film career playing beautiful young women stalked by mad killers in such films as Halloween (1978), The Fog and Terror Train (both 1980), and Halloween II (1981), Curtis just feels right in Blue Steel as the feisty girl against the seemingly unstoppable mass murderer. She also looks the same in her early 30’s when Blue Steel was filmed as she did when she was just in his 20’s and starring in slasher movies in the late 70’s and early 80’s. The general idea of Blue Steel seems to be that Curtis’s Megan Turner never realizes just how precarious her situation is, whether she is at home (where her father is an abusive husband), in the office (where her colleagues don’t respect her), or on the streets of New York City (where the killer stalks her).

The problem is Kathryn Bigelow and Eric Red’s screenplay, which attacks plausibility at every turn. This is a brutal cat and mouse game, and Bigelow presents Blue Steel as an exercise of urban violence and fierce gunplay – the kind that was fashionable in 1980’s action movies such as Die Hard and Lethal Weapon. Much of the violence is a kick in the gut, but this concept plays with the conceit of horror movies (where many things that happen don’t have to make sense) rather than cop movies (where most things should make real world sense). In the Blue Steel, the killer is unstoppable and somewhat supernatural and the girl hero and the police department don’t seem to have much common sense, which they should.