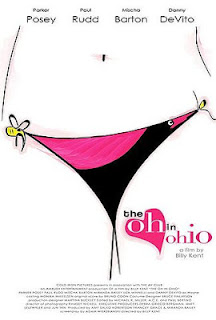 The subject of this movie review is The OH in Ohio, a 2006 indie comedy from director Billy Kent. The film stars Parker Posey and Paul Rudd as a couple whose problems with the orgasm causes them marital strife.

Pricilla Chase (Parker Posey) has fashioned the perfect life for herself. She married her high school sweetheart, biology teacher Jack Chase (Paul Rudd), and she’s a high-powered advertising executive. Pricilla, however, has left something out of her life – her orgasm, and Jack claims that her inability to have an orgasm has ruined their marriage. While Jack goes off rediscovering his manhood with a smart young coed, Kristen Taylor (Mischa Barton), Pricilla sets off to discover self-pleasure and along the way falls for the unlikeliest lover, Wayne the Pool Guy (Danny DeVito).

The OH in Ohio is an entertaining indie film, one of those that appeals to a much wider audience than the small one that had a chance to see it during a limited theatrical run and film festival showings. Although the script is funny, the strength of the picture comes from the ability of the actors to make the most of their parts – another trait of indie flicks. Each actor takes his or her part, regardless of size, and gives it some zing and zest so that the character engages the viewer and sticks in his mind throughout the movie, even if the character only appears on screen once or twice.

Credit goes to director Billy Kent for allowing his actors to make use of their ability to take characters off the written page and embellish them. Although the leads are good, Mischa Barton as Kristen Taylor and Keith David as Coach Popovitch (hilariously blunt and randy) sparkle in support of the leads. The OH in Ohio is what many indie films are – movies defined by their quirky characters (think Little Miss Sunshine), and this is a movie for people who love characters.