"The Raven," Nevermore? How 'Bout Nevermind 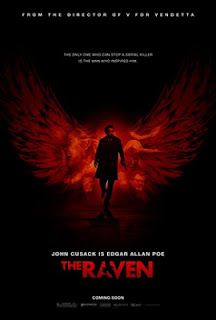 The Raven is a 2012 mystery-thriller from director James McTeigue. This film is the most recent one to take its name from the Edgar Allen Poe poem, “The Raven” (first published in 1845). The Raven stars John Cusack as Poe, who is trying to solve a series of horrific murders that are seemingly inspired by his stories.

The film opens in 1849, and Edgar Allen Poe (John Cusack) has just returned to Baltimore, Maryland. Broke and drunk, Poe is hoping to get some funds from the newspaper, the Baltimore Patriot, for publishing one of his reviews. What he finds instead is a general disinterest in him and his recent work. Poe also hopes to marry a young socialite, Emily Hamilton (Alice Eve), but her father, Captain Hamilton (Brendan Gleeson), would rather just kill Poe.

Things can’t get worse, can they? But they do when police Inspector Emmett Fields (Luke Evans) confronts Poe. Baltimore is rotten with unsolved murders, and the latest are two ghastly slayings that Fields believes is connected to Poe’s writings. Taunted by an unknown madman, Poe and Fields are forced into a cruel game of wits in which they must uncover the killer’s identity or more people will die.

When I first started reading about movies, I came across the term “high-concept.” It was used to describe a movie premise that could be pitched briefly and concisely. Imagine a movie that can be described in 20 words or less. The Raven is basically a high-concept: Edgar Allen Poe has to uncover the identity of a murderer who gets his ideas from Poe’s stories. That sound’s clever especially when you consider that Poe basically invented the genre of detective fiction as we know it with his stories starring the character, “C. Auguste Dupin.” Poe also died under mysterious circumstances, and this film’s story offers a fanciful version of events during Poe’s last days.

The Raven the movie is not clever. It’s just a bad movie. There were times while I was watching this that I could even convince myself that the filmmakers tried hard to make a good movie, but I just as often found myself thinking that at some point, the people involved with The Raven knew they had a really bad movie on their hands.

This movie is clumsy, but even worse, it’s ridiculous – from preposterous concept to silly ending. The whole thing is just a procession of absurdities. I like John Cusack, but he is awful in this, and the (dis)credit cannot go to the screenplay alone, which is amateurish (to put it mildly). Sometimes, Cusack seems disinterested and bored and other times lost. Poe deserves better.