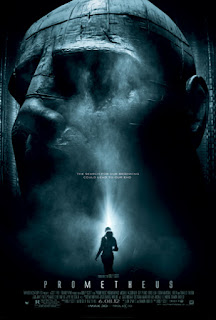 Prometheus is a 2012 science fiction film from director Ridley Scott. The film is related to Ridley Scott’s 1979 film, Alien, and is not quite a prequel to the movie, at least according to Scott. I think that it is one of the year’s best films, thus far.

Prometheus is mainly set near the end of the 21st century. In 2089, archaeologists Elizabeth Shaw (Noomi Rapace) and Charlie Holloway (Logan Marshall-Green) discover a star map, one similar to others they have found at archaeological digs of other ancient sites. They interpret these maps as an invitation from the beings that created humanity, which the two call the “Engineers.”

They convince Peter Weyland (Guy Pearce), the elderly and dying CEO of Weyland Corporation, to fund a space-going, scientific exploration vessel, Prometheus, so that they can follow the star map to a distant moon. Prometheus and her crew of 17 arrive at the moon, LV-223, where they find an artificial structure. What awaits them inside is a mystery that spans time and space and a terrifying battle to save the human race.

By the point in the film where Prometheus arrived at its destination, I was sure that Prometheus the movie was Ridley Scott’s attempt at making his own 2001: A Space Odyssey, the famous Stanley Kubrick science fiction film. This film has a sense of wonder, so much so that it seems to celebrate the human urge to explore and to discover. The screenplay, which is brimming with interesting ideas and intriguing notions, offers a counter-balance to Scott’s urge to explore. That is the idea that people do the things they do simply because they can, and that asking why may be irrelevant.

The film is beautiful. Its visual aesthetic design mixes the slick holographic cool of James Cameron’s Avatar with touches of H.R. Giger’s “biomechanoid” style which defined the film, Alien. There are also a number of good performances. As Meredith Vickers, Charlize Theron does menace in a way more bracing than in her Oscar-winning performance in Monster, and Idris Elba steals scenes as Janek, the captain of the Prometheus. However, Michael Fassbinder as the android, David, is fantastic. He is mesmerizing, intimidating, and even sexy.

Prometheus is thoughtful, always playing around with ideas or a thesis or two; even when the film turns on the action and the thrills, it’s still thinking. It does no damage to the original Alien film, but Scott and collaborators have the makings for a new, genuine science fiction franchise.

Posted by Leroy Douresseaux at 7:12 AM