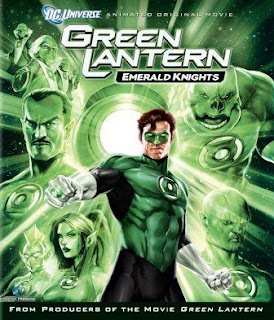 Some of the stories include “The First Green Lantern,” which tells the story of Avra, an unlikely Green Lantern who actually was not the first person to get a Green Lantern ring. “Kilowog” tells the story of the Green Lantern drill sergeant, Kilowog (Henry Rollins), and Sgt. Deegan (Wade Williams), who was Kilowog’s drill instructor. In “Abin Sur,” Hal Jordan’s predecessor, Abin Sur (Arnold Vosloo), hears a dark prophecy from Atrocitus (Bruce Thomas), an alien criminal he captured.

Green Lantern: Emerald Knights has excellent visuals. I would describe this movie as the hand-drawn animation equivalent of the computer-animated series, “Star Wars: The Clone Wars.” In fact, the action is on par with the Star Wars animated series, and the voice acting here has range, quality, and emotional resonance.

However, some of the action is laughable, ridiculous, and way too over-the-top even for superhero/space opera fantasy. The framing sequence has a paper-thin plot and story. I’d say that the writers should be embarrassed about this, but I bet they didn’t even notice. Still, the anthology part of this is pretty good, so I’d recommend Green Lantern: Emerald Knights.