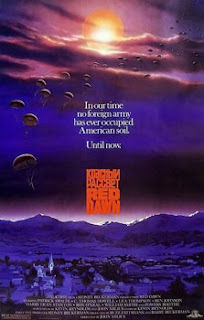 The subject of this movie review is Red Dawn, a 1984 war film from director John Milius (Conan the Barbarian). The film is set in an alternate version of the 1980s and depicts an invasion of the United States launched by the Soviet Union and its Cuban and Nicaraguan allies. The story follows a group of American high school students who launch a guerrilla war against the invaders.

World War III begins on a September morning. It arrives in the small town of Calumet, Colorado when paratroopers begin dropping from the sky. These are Russian Airborne Troops, and soon after them, Cuban and Soviet troops begin an occupation of Calumet. Jed Eckert (Patrick Swayze) and his teenage brother, Matt (Charlie Sheen), take a small group of Matt’s fellow high school students and flee into the surrounding mountains.

After taking in two teen girls, this group begins an armed resistance against the occupation forces. These young people start calling themselves “Wolverines.” Meanwhile, back in town, Colonel Ernesto Bella (Ron O’Neal) is punishing the townspeople for the Wolverines’ attacks on his troops. Which side will give in first?

When Red Dawn was first released to theatres in 1984, I ignored it, although I knew many people around my age who loved the movie. I recently watched it for the first time, and I found little about it worth loving or hating. Red Dawn is basically a misfire with a lot of good ideas. It is not pro-war and is not so much a war movie as it is a movie about children leading a resistance group during wartime. In fact, I guess that I can best describe Red Dawn as a poorly realized movie about guerrilla warfare and child soldiers.

I cannot say the acting is bad because the actors don’t have much with which to work. The script offers very little character development, and the action scenes that should help to develop the characters or at least help the audience to get to know them better actually make the characters’ motivations increasingly murkier.

Red Dawn essentially has no plot, unless the depiction of a series of skirmishes and battles is the plot. The concept has potential; it simply was not developed nearly 30 years ago when the movie was made. As it stands, Red Dawn is a time capsule movie. It is a piece of pop culture, reflective of the mid-1980s, a time of Ronald Reagan, anti-Soviet Union propaganda, paranoia, and warmongering. At the time, there seemed to be a mood in the U.S., an aching for a fight with someone we could beat, especially if it was a country or entity that could act as a stand-in for the Soviet Union/Russia.

Red Dawn delivered what reality could not. Here, white guys wearing tight jeans, wielding high-powered firearms, and packing lots of military gear get to shoot some Ruskies. Too bad no one thought to shoot a good movie.

Posted by Leroy Douresseaux at 9:12 AM