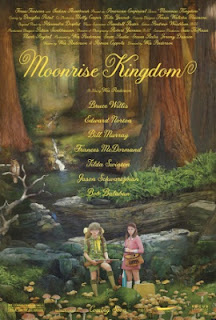 Moonrise Kingdom is a 2011 romance film from director Wes Anderson. Co-written by Anderson and Roman Coppola, the film follows a pair of young lovers on the run from the local search parties out to find them.

Moonrise Kingdom opens in the late summer of 1965 and is set on the idyllic New England locale of New Penzance Island. Sam Shakusky (Jared Gilman) is a 12-year-old orphan attending a “Khaki Scout” summer camp. Suzy Bishop (Kara Hayward) is a local girl who lives with her parents, Walt (Bill Murray) and Laura Bishop (Frances McDormand), and her three younger brothers. After meeting during a local church play, Sam and Suzy run away together.

When I reviewed the Coen Bros. remake of True Grit about two years ago, I said (more or less) that the film, while quite good, seemed like an exercise of the filmmaking brothers’ directorial trademarks and flourishes. I pretty much think the same of Wes Anderson’s Moonrise Kingdom. This movie is the quirky style and visual eccentricities of Anderson distilled into a fragrant essence that will entice his admirers, both old and new, for ages.

It’s all here. The primary colors have never been this primary, and the deliberate, methodical cinematography captures the intensity of those colors with such clarity that it could leave the viewer in a stupor (which it did to me early on in the movie). Anderson gets good performances that take the screenplay’s flat, one-dimensional characters and transforms them into poignant humans – flawed, but graceful.

Regardless of how quirky it all seems, Moonrise Kingdom is a love story like no other. Rarely do films capture stubborn youth in love as well as this film does. Jared Gilman as Sam and Kara Hayward as Suzy give inimitable performances, and without them, this movie would be nothing but an oddity that was shot in vivid color. Instead, Moonrise Kingdom is a rare romance in which the romantic comedy and drama elements cannot hide the fact that this is a pure love story.

Posted by Leroy Douresseaux at 8:08 AM