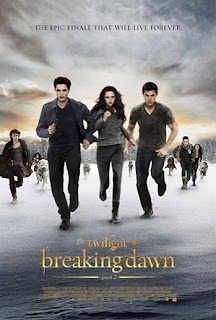 The Twilight Saga: Breaking Dawn – Part 2 continues the love story a young human woman, Bella Swan (Kristen Stewart), and her vampire boyfriend, Edward Cullen (Robert Pattinson), who were married in the previous film. The story begins as Bella opens her eyes to find her senses sharpened. The transformation is complete; she is now a vampire. Still, all is not perfect.

Bella is shocked to learn that her recently born infant daughter has imprinted on her friend and former love interest, Native American werewolf, Jacob Black (Taylor Lautner). Bella must also find a way to explain her new situation to her worried father, Police Chief Charlie Swan (Billy Burke). Meanwhile, Bella and Edward’s daughter does not stay an orphan for long. Renesmee Cullen (Mackenzie Foy) is undergoing a tremendous growth spurt, which leads to a bigger problem. When a false allegation puts their family in front of the Volturi to likely face a death sentence, the Cullens gather other vampire clans and old allies in order to protect Renesmee.

I think this is the result of having a director like Bill Condon, who is not just good with character drama. He is also a standout, and he did not get enough credit for what he did with Dreamgirls, getting so much more out of the material than it offered. Here, in his second Twilight movie, he gives all the supernatural characters mortality, not just Edward and Bella (who have seemed forever on the edge of demise in this series). Mortality for the immortals means that not only do their actions have real consequences, but also that those consequences can mean the end of them. When everyone has “skin in the game,” conflict is rich and complicated.

However, the sense of death does not dampen this movie’s themes of hope and happiness. Who knows how many days lie ahead for each character? There may be many days (or not), but they will be happy days, with family and friends. There will also be dark days, as in any human’s life. In fact, The Twilight Saga: Breaking Dawn – Part 2 is about loving family, close friends, and new friends and allies made.

For Twilight as a whole, the franchise gets something that escapes even the best franchises, a superior ending. Compared to The Dark Knight Rises, the end of Christopher Nolan’s so-called “The Dark Knight trilogy,” Breaking Dawn – Part 2 is Oscar-worthy.