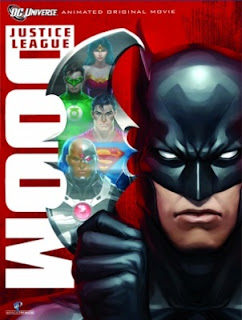 Justice League: Doom is a 2012 direct-to-video superhero animated film from Warner Bros. Animation. Starring DC Comics’ ultimate superhero team, the Justice League, this is also the 13th feature in the DC Universe Animated Original Movies line. Bruce W. Timm is an executive producer on the film, and Dwayne McDuffie wrote the screenplay before his death in February 2011.

Justice League: Doom is loosely based on the comic book story arc, “Tower of Babel,” which was published in the former Justice League comic book series, JLA #43-46 (July 2000 to October 2000 cover dates). The story was written by Mark Waid and drawn by artists Howard Porter and Steve Scott. A group of villains launch a highly-successful attack against the members of the Justice League using secret information compiled on the heroes by Batman.

The film begins with the Justice League beating up the Royal Flush Gang, but in the aftermath of this successful mission, the League doesn’t know that it is being spied upon – especially Batman (Kevin Conroy). The immortal villain, Vandal Savage (Phil Morris), is back, and he has a plot to destroy the world as we know it. To that end, he creates the Legion of Doom to make sure that the Justice League does not stand in his way.

I find that of all the DC Universe Animated Original Movies, I’m partial to the ones featuring the Justice League or Batman, and Justice League: Doom features both. Although there may be some holes in the plot regarding the Legion of Doom’s attack on the Justice League, the film is very well written, in terms of a superhero action movie. The action in the film works in such a way that it captures the spirit and energy of a superhero comic book.

The animation is of a high quality so that the film is eye-candy, at least to me. I love the characters, especially Bane, Ma'alefa'ak, and Mirror Master. The voice performances are also of a high quality, although I found Nathan Fillion’s performance as Green Lantern a tad bit dry. Carl Lumbly is superb as both Martian Manhunter and Ma'alefa'ak; these characters should have their own movie, if Lumbly can reprise the roles. To put it plainly and simply, Justice League: Doom is fun.

Posted by Leroy Douresseaux at 8:10 AM